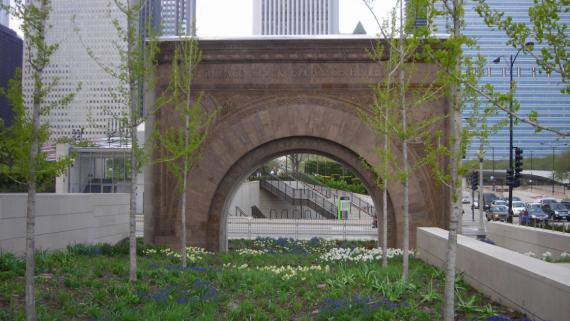 Located at the southwest corner of S. Columbus Drive and E. Monroe Street

During the late nineteenth century, architect Louis Henri Sullivan (1856–1924) created a new and honest expression in the design of buildings, inspiring a genre known as Chicago School of Architecture. While many other architects adhered to fanciful historical styles which were very popular at the time, Sullivan created buildings that expressed their structural design, relying only upon simple and organic ornamentation to embellish their facades. The Chicago Stock Exchange Building, designed by Sullivan with his partner, Dankmar Adler, was widely considered an architectural masterpiece. Constructed in 1893, the thirteen-story building incorporated Sullivan’s signature ornamentation that combined geometric forms with expressions of natural foliage.

In the 1960s and 1970s, many beautiful nineteenth century buildings in Chicago were demolished to make way for new development. In attempt to inspire preservation efforts, photographer Richard Nickel (1928–1972) began to document old buildings as they fell into decay or were slated for demolition. As Nickel struggled to find support to save monuments like the Chicago Stock Exchange Building, he asserted: “Great architecture has only two natural enemies: water and stupid men.” Sadly, Nickel died in 1972 when a staircase collapsed on him inside the Chicago Stock Exchange Building. Despite a strong pubic movement opposing the demolition of this iconic work of architecture, the building was razed in 1972. After the demolition, the Art Institute of Chicago acquired the building’s terra cotta arch, along with several other original fragments. Using a gift from the Heller Foundation, the Art Institute installed the arch in a small plaza just northeast of the museum in 1977. Around the same time, the Art Institute opened a reconstructed version of Adler & Sullivan’s Stock Exchange Trading Room as part of the museum’s East Wing Addition.