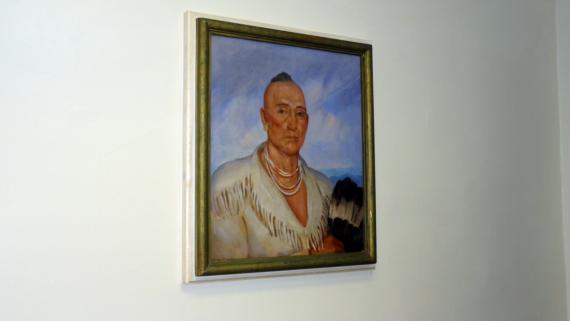 This portrait of Chief Black Hawk was likely created soon after the construction of Blackhawk Park’s field house in 1926. The painting originally hung in the supervisor’s office. Although the artist is unknown, he or she was clearly inspired by the famous painting Múk-a-tah-mish-o-káh-kaik, Black Hawk, Prominent Sac Chief, which is part of the Smithsonian American Art Museum’s permanent collection. George Catlin produced the iconic portrait in 1832, shortly after Chief Black Hawk failed at his attempt to lead a group of Sac, Fox, and Kickapoo Indians west across the Mississippi River to reclaim their ancestral lands in Illinois.

George Catlin (1796–1872) specialized in paintings of Native Americans and published several books that chronicled his encounters with the indigenous people of North, Central, and South America. Catlin met Black Hawk when the chief was imprisoned at the Jefferson Barracks outside of St. Louis. His portrait conveys Black Hawk’s dignity and sorrow. According to the Smithsonian Institution, Catlin wrote, “When I painted this chief, he was dressed in a plain suit of buckskin, with a string of wampum in his ears and on his neck, and held in his hand his medicine-bag, which was the skin of a black hawk, from which he had taken his name, and the tail of which made him a fan, which he was almost constantly using.” The Blackhawk Park portrait depicts the chief in the exact same stance as Catlin’s portrait. It also shows Black Hawk wearing the same kind of fringed buckskin suit, similar jewelry, and holding a nearly identical feathered fan.

Over the years, the Blackhawk Park portrait became damaged and quite dirty. In 2012, the Parkways Foundation provided funds to fully conserve the portrait, which now hangs in the entry hall of the field house.