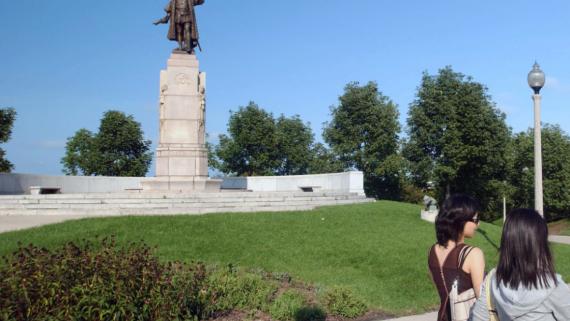 The Christopher Columbus statue has been temporarily removed from Grant Park.

Chicagoans of Italian descent donated Grant Park’s Christopher Columbus Monument, which they dedicated on Italian Day in 1933 at A Century of Progress, Chicago’s second World’s Fair. During the ceremony—attended by tens of thousands—Bishop Bernard J. Shiel blessed the new sculpture. The Depression Era monument not only commemorated Christopher Columbus's arrival to the New World, but also conveyed the spirit of President Franklin Delano Roosevelt’s New Deal.

Sculptor Carl Brioschi produced a realistic portrayal of Chirstopher Columbus (1451- 1506), the Italian explorer who arrived in the Americas in 1492. He depicted Columbus holding a map and gesturing as though his is standing on a ship and viewing land in the distance.

Born in Milan, Carl Brioschi (1879–1941) received artistic training in Italy before immigrating to New York at the turn of the century. He eventually settled in Minnesota, where he produced a sculptural bas-relief for interior of the State Capitol Building. Brioshi collaborated with St. Paul architect Clarence H. Johnston on the design of the Christopher Columbus Monument’s pedestal and setting. The Art Deco style granite base features carved depictions of the Santa Maria, one of the three ships that sailed to the New World from Spain; Paolo Toscanelli, the famous astronomer and mathematician who charted the course of the journey; Columbus’ tutor Amerigo Vespucci, who theorized that the world was round and for whom America was named; and the city seal of Genoa, Columbus’ birthplace. On the four corners of the base, sculptural busts represent Faith, Courage, Freedom, and Strength.