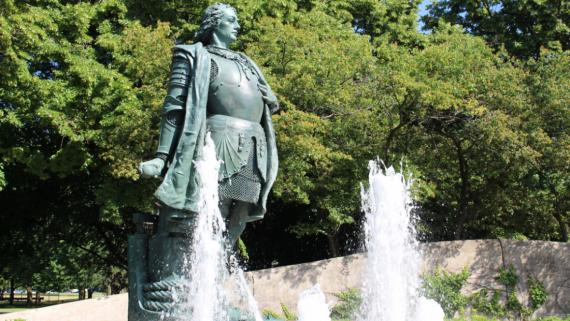 The Christopher Columbus Monument has been temporarily removed from Arrigo Park.

This nine-foot-tall figure of Christopher Columbus is depicted wearing a fanciful cloak over a suit of armor. Owners of the Columbus Memorial Building commissioned the sculpture in the 1890s for their new commercial building located downtown at the corner of State and Washington streets. Moses Ezekiel, an internationally prominent artist who received numerous awards and was decorated by several European rulers including Italy’s King Victor Emmanuel III, created the Christopher Columbus sculpture.

Born and raised in Richmond Virginia, Moses Jacob Ezekiel (1844-1917) was one of fourteen children. He became the first Jewish cadet at the Virginia Military Institute and served in the Confederate Army at the Battle of Newmarket. After the Civil War, he graduated from the Institute and went on to study art at the Royal Academy of Art in Berlin. He settled in Italy and sculpted Chicago’s Christopher Columbus monument in his Rome studio, where Pope Leo XIII blessed the artwork. Prior to its installation in a niche above the entrance to the Columbus Memorial Building, the bronze statue was displayed in the Italian Pavilion at Chicago’s 1893 World’s Columbian Exposition.

The statue remained in its prominent original location until 1959, when the Columbus Memorial Building was razed. At that time, the building’s owners asked the Municipal Art League of Chicago to find a new home for the sculpture. Although Disneyland, Goodwill Industries, and groups in Columbus, Ohio and Columbus, Indiana requested the sculpture, it sat in storage in a lumber yard for several years. In the 1960s, Victor Arrigo (1908–1973), an Illinois State Representative and a vocal advocate for the Italian-American community, led an effort to conserve and relocate the sculpture. After Arrigo raised $25,000, the Christopher Columbus monument was donated to the Chicago Park District and installed along with a new fountain in Little Italy’s Vernon Park in 1966. A few years later, the Park District renamed the site Arrigo Park.

Gallery:
Arrigo Park: Christopher Columbus Monument
Date Posted: 7/14/2015 In its original location, the sculpture stood in a niche above the entrance to Chicago's…
Advertisement