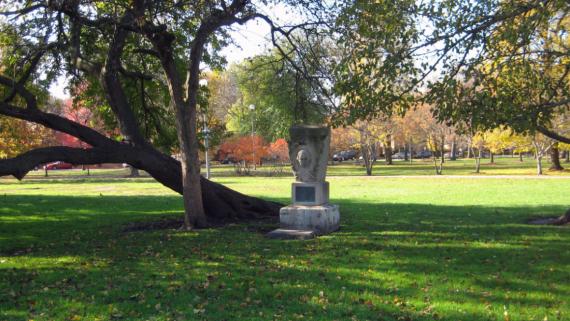 Julius H. Huber, a prominent local architect who lived near Indian Boundary Park, donated this architectural keystone in 1927. It originally marked the apex of the arch at the Washington Street entrance to the old City Hall and County Courthouse. Constructed between 1877 and 1885, the limestone and granite building was designed by architect James J. Egan (1839–1914). Sculptor A.C. Goddard carved its elaborate ornamentation including this keystone that features a depiction of George Washington’s face. Razed between 1906 and 1911, the combined City Hall and County Courthouse building had enormous granite Corinthian columns. (A remnant of a column shaft and capital can be found today in Monument Park.)

The Ridge Avenue Park District thanked Julius Huber for the donation at the dedication ceremonies for the keystone on July 4, 1927. They installed the architectural fragment near an existing boulder and plaque marking a memorial tree that had been planted by Rogers Park Woman’s Club in 1926. Although the tree later died, the plaque remains, honoring American soldiers killed in France during World War I.

Another nearby boulder and plaque commemorates the home site of Phillip Rogers, the early settler for whom Rogers Park was named. There is also an aluminum plaque describing the “Indian Boundary,” the demarcation established by the 1816 Treaty of St. Louis through which Native American tribes ceded a twenty-mile-wide swath of land to the United States Government. The northern boundary line of the ceded area ran through what later became Indian Boundary Park. The demarcation remained in effect only through 1833, tribes were forced entirely from the area in the face of white settlement.

Gallery:
Indian Boundary Park: City Hall Keystone
Date Posted: 7/24/2015 The plaque on the base of the keystone acknowledges that its donor, Julius H. Huber, dedicated it…
Advertisement