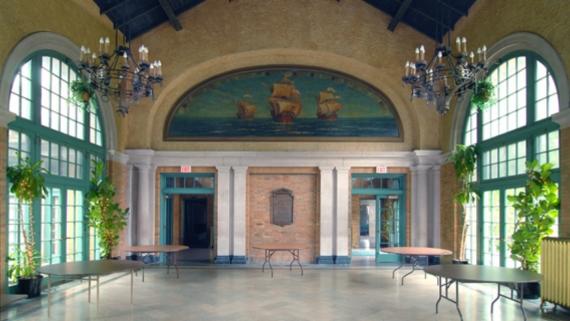 Located in the Refectory Great Hall

In 1920, the West Park Commissioners hired architects Chatten & Hammond to design a boathouse and refectory for Columbus Park. The elegant Mediterranean Revival style building included space for boat storage and launching, a kitchen and lunch counter, and a Great Hall for parties and dancing. Construction began the following year. As the building neared completion, the commissioners asked the Chicago department store Marshall Field and Company to submit a proposal for a decorative mural in the refectory’s Great Hall. The West Park Commissioners approved the design in January 1922, and the mural was created shortly thereafter.

Roy L. Terwilliger (1878–1960), an interior designer for Marshall Field’s, produced the artwork. Born in Dekalb, Illinois, Terwilliger received a degree in design from the School of the Art Institute of Chicago in 1897. He found work designing rugs and returned briefly to the school in 1903 to study ceramics, serving on a jury to select ceramics for an Art Institute exhibition several years later. By 1920, he was employed by Marshall Field’s. According to Terwilliger’s obituary in the Chicago Tribune, after a long career with the department store, he went on to work for the Art Institute of Chicago.

Terwilliger’s tympanum-shaped mural depicts Christopher Columbus’s three ships, the Nina, the Pinta, and the Santa Maria. The ships are sailing on a wavy sea with their sails fully open. Along the arched top of the mural is an inscription that is painted on an open scroll: “And There Shall Be No More Ultima Thule for the West Has Become the East.” The term ultima thule, used in medieval geography, refers to a northern region of the world, possibly Iceland. The inscription is meant to signify that Columbus made an important contribution by joining the New World with Europe. In addition, the Great Hall has a series of painted beams that are decorated with Coats of Arms and with the names of other European explorers, such as Ponce de León, Cortez, and Magellan, with dates of their discoveries.

Art conservator Timothy Lennon cleaned and treated the mural in the late 1980s. The building was fully restored a few years later. Today, the Columbus Park Refectory is a special event venue that can be rented for parties, weddings, and other gatherings.