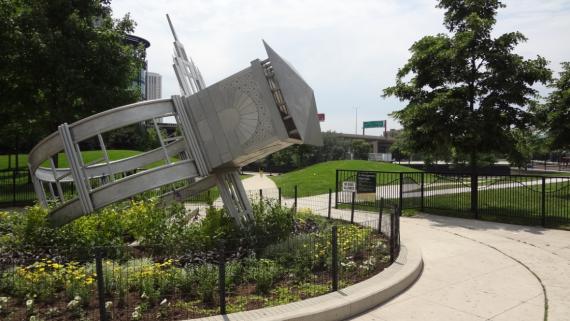 In 1989, Sheila Klein, a Los Angeles artist who now resides and works in Washington State, produced the Commemorative Ground Ring for a temporary exhibit known as Sculpture Chicago. The artwork emulates an enormous engagement ring, incorporating imagery from the city’s architectural legacy. Elements include a skyscraper, the famous three-part Chicago window, and a form that looks like the famous Getty Tomb by revered architect Louis Sullivan. The artist describes the aluminum sculpture “a tangible symbol of my love for Chicago architecture.”

After being displayed at Riverfront Plaza during the sculpture exhibition, the Commemorative Ground Ring was purchased by the Miro Fund for placement near the Chicago Historical Society—now the Chicago History Museum. It was installed near the museum at the corner of W. North Avenue and N. Clark Street in 1990, but only remained at this location for several years. In the mid-1990s, when the museum made improvements to its surrounding landscape, the Chicago Park District moved the artwork to a small North Side park. That site soon went under renovations, and the Commemorative Ground Ring was placed in storage. Finally, in 2005, the Park District installed the artwork in Park 511, a newly developed 3-acre open space with a playground, dog-friendly area, and walkway leading down to the Chicago River. In 2010, the Park District’s Board of Commissioners renamed the park in honor of a signficant figure in Chicago history, Aaron Montgomery Ward.