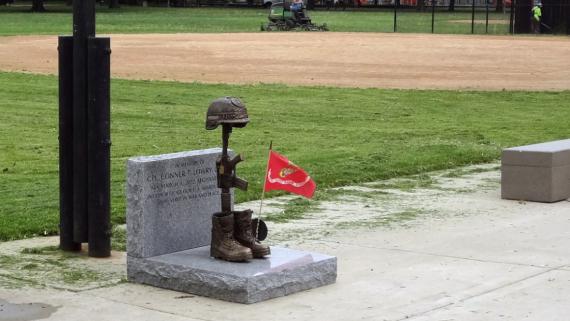 Cpl. Conner T. Lowry USMC (1988 – 2012) died conducting combat operations in the Helmand province of Afghanistan. Born and raised in Chicago’s Beverly neighborhood, Lowry decided to leave college in 2008 to serve his country by joining the United States Marines. Deployed to Afghanistan in the fall of 2011, he died on March 1, 2012, just a few months before he was scheduled to return to the U.S. Lowry received many honors for his service including the Navy and Marine Corps Achievement Medal, Combat Action Ribbon, Good Conduct Service Medal, National Defense Service Medal, Afghanistan Campaign Medal with bronze star and Humanitarian Service Medal.

Lowry spent much of his childhood playing in Beverly Park. Prior to his death, he informed his mother that if he didn’t survive the war, he hoped to be honored with a memorial in Beverly Park. The Conner T. Lowry Memorial includes a lifelike pair of a marine’s boots supporting a semi-automatic rifle which is topped by a helmet. Cast in bronze, the boots, rifle, and helmet are mounted on a granite stand that bears an inscription honoring Conner T. Lowry as well as “all of our US Armed Forces who serve in war and peace.”

Mayor Rahm Emanuel dedicated the Conner T. Lowry Memorial on March 1, 2013, marking the one year anniversary of Lowry’s death. Many other public officials participated in the event which was attended by hundreds of people, including schoolchildren from St. John Fisher Elementary School, Lowry’s Alma Mater. As part of the ceremony a new honorary street sign was unveiled. Located near Beverly Park, the 10200 block of South Maplewood Avenue has been officially designated as Honorary Cpl. Conner Lowry Way.