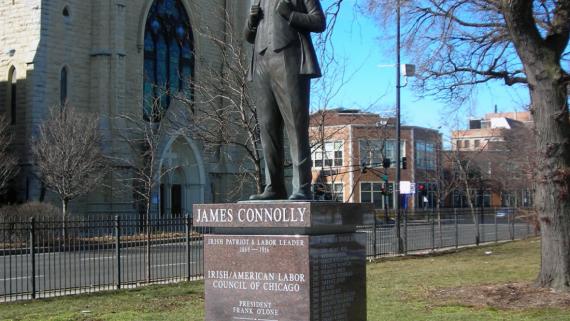 This six-foot-tall bronze sculpture which stands on a base of equal height depicts James Connolly (1868–1916), a labor organizer of international importance and leading Marxist theorist. A champion for the working class, Connolly helped found the Socialist Labour Party in Great Britain. He lectured in the United States in 1902 and immigrated here the following year. Connolly went on to play an important role in the Socialist Party of America and the Industrial Workers of the World. He also founded the Irish Socialist Foundation in New York in 1907.

After returning to Ireland in 1910, Connolly formed the Irish Citizens Army, a group that provided protection to workers and strikers. He became a leader in the movement for Irish independence, and was executed by the British government after he helped plan the Easter Rising of 1916.

In 2002, Connolly was named one of the “100 Greatest Britons” in history. Today, several major buildings in Ireland are named for Connolly. There is also monument dedicated to him in Dublin, outside of the Services, Industrial, Professional and Technical Union’s—known as SIPTU—Trade Union Hall.

Donated by the Irish American Labor Council of Chicago, this sculpture may be the only James Connolly Monument in the United States. It was produced by Tom White, a self-taught artist from Texas who currently lives and works in Maine. White did not begin his career as a sculptor until the 1990s. His main goal as an artist is to express the spirit of the subjects he sculpts.