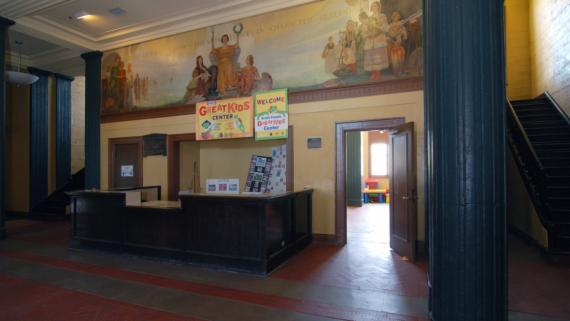 Prominently displayed in Davis Square's fieldhouse lobby, William Edouard Scott’s Progressive Era mural celebrates the spirit of recreational activity. The inscription—“Constructive Recreation, The Vital Force in Character Building”—spoke directly to patrons of the field house. The mural was originally housed in Washington Park, most likely in the administration building of the South Park Commission (which is now the DuSable Museum of African American History). Sometime in the late 1930s, the painting was moved to its current home in Davis Square Park; however, photography taken at this time reveals that the canvas was trimmed on either end to accommodate the slightly narrower space above the front desk in the lobby. As a result, Scott’s signature appears truncated on the lower-right corner.

The painting is divided into three distinct sections. At center, a seated Columbia or Liberty lifts a torch and a wreath, representing enlightenment and victory, respectively. She is flanked by two figures: to her left, Drama, dressed in old world style clothing with a globe and a mask of tragedy at her side, reads from a manuscript; to her right, Art is depicted as a modern woman holding a palette and brushes. At the far left of the composition, several young men are dressed for a variety of sports, including football, tennis, and track and field events such as discus throwing and pole vaulting. On the right, a group of young women represent the various ethnicities (including Dutch, Spanish, Mexican, and Czech) that settled in the area. The male and female groupings at either side of the panel also visually direct visitors to the two gymnasiums, which in the mid-twentieth century were separated by gender (men to the left; women to the right). Viewed as a whole, the composition signifies the combination of intellectual and physical activities fostered by the park.

One of the foremost African American muralists of the early twentieth century, William Edouard Scott (1884–1964) moved to Chicago in 1904 to attend the School of the Art Institute of Chicago. He is most remembered for portraying blacks as prominent, noble individuals in works that helped redefine the image of African Americans in art. Scott spent time abroad in Europe, where he studied at the Académie Julien in Paris, as well as in Haiti before returning to Chicago in the early 1930s to create murals for the 1933–34 World’s Fair. In total, he created over seventy-five murals commemorating black history and culture, in addition to several religious or allegorical murals such as Constructive Recreation, The Vital Force in Character.

This mural was made possible due to the benefaction of John Barton Payne. Payne was a prominent Chicago judge who served as president of the South Park Commission’s board from 1911 to 1923. He also held the position of United States Secretary of the Interior under President Woodrow Wilson. In 1909, Payne established a fund for the decoration of buildings in the South Park System, including Washington Park.