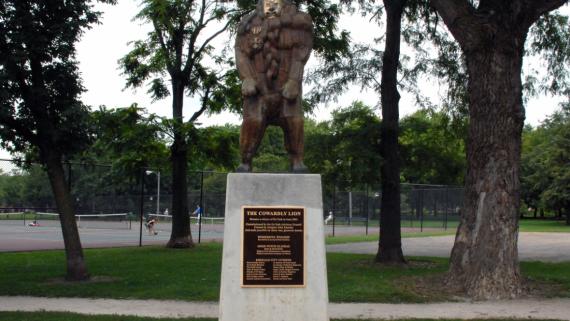 Between 1995 and 2006, the Oz Park Advisory Council commissioned artist John Kearney to create four sculptures portraying the signature characters from L. Frank Baum’s classic book The Wonderful Wizard of Oz. Baum (1856–1919) wrote the book when he lived in Chicago, and the park is named in his honor.

Installed in 2001, the Cowardly Lion was the second of Oz Park’s four sculptures. While Kearney was previously known for using chrome automobile bumpers to create his sculptures, the Cowardly Lion statue is cast in bronze. Not only has it become increasingly difficult to find chrome bumpers, but Kearney thought that bronze would be the best material to emulate a lion’s furry coat.

Kearney (b. 1924) studied at the famed Cranbrook Academy of Art in Michigan, and the University per Stanierie, Perugia Italy. He also received a Fulbright Award to Italy and has been a visiting artist to the American Academy of Rome several times. Over the years, he has won many honors including the National Academy of Design's Wallace Truman Prize.

Kearney and his wife, aritst Lynn Kearney, opened the Contemporary Art Workshop, a community art center and gallery in 1949. Originally located at Michigan Avenue and Chicago Avenue, the workshop provided a forum to help emerging Chicago atists launch their careers. A co-founder of the workshop included Cosmo Campoli, whose Bird of Peace sculpture can be seen in Nichols Park. The Kearneys later moved the non-profit workshop along with their home into loft behind the Wrigley building. The final site for the art center was the Lincoln Park neighborhood on W. Grant Place. Along with regular exhibitions, the Kearneys and other artists taught classes in painting, sculpture, weaving, and jewelry-making at the workshop until it closed its doors in the spring of 2009.