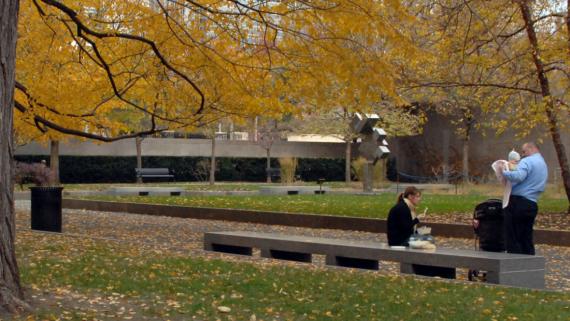 Cubi VII is highly respected work of abstract sculptures located in the Art Institute’s north garden. It is part a series of 28 Cubi stainless steel outdoor sculptures owned by various collectors and cultural institutions throughout the world. Each sculpture in the series features rectangular prisms with a seemingly perilous balance that shows the dichotomy between material and form.

The Cubi series is considered extremely significant in the development of twentieth century sculpture. American abstract expressionist sculptor David Smith (1906–1965) began working on the series in 1961. He died in an automobile accident just after completing the final piece (Cubi XXVIII). At the time of its sale, Cubi XXVIII was the most expensive contemporary work ever sold at auction. The Art Institute of Chicago acquired Cubi VII from the artist’s estate. The scale, geometric forms, and reflective qualities of the sculpture make it especially attractive within its outdoor setting. Smith’s preliminary drawing of the work is also owned by the Art Institute of Chicago.