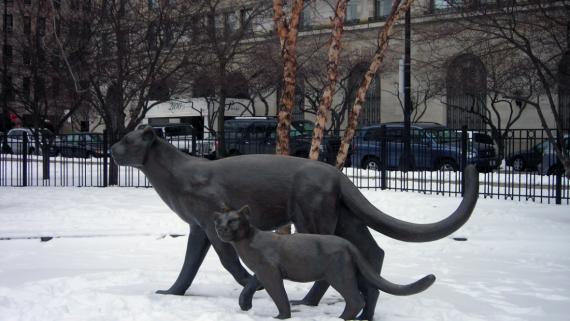 In the early 1990s, the Mid-North Association worked with the Chicago Park District to create a special playground that would appeal to neighborhood children as well as visitors to nearby Lincoln Park Zoo. Along with new playground equipment, the project included the installation of three bronze sculptures of zoo animals produced by Tom Tischler. An artist who specializes in animal sculptures, Tom Tischler began learning about taxonomy and anatomy at the Zoological Museum of Zurich. He later worked for the Ethiopia Conservation Organization and then began producing large bronze sculptures of zoo animals.

Tischler produced Baby Elephant, Galapagos Tortoise, and an orangutan entitled Old Man of the Forest for the Lincoln Park Playground. The tree sculptures were installed in 1993. Soon after the completion of the project, the Chicago Park District renamed the playground in honor of one of its major donors, the Nathan Cummings Foundation.

In 2003, community members raised funds to make additional improvements to Cummings Playground. These efforts allowed for the installation of bronze Mother and Child Mountain Lion sculptures by Boban Ilic. A Yugoslavian artist who studied at the Academy of Applied Arts in Belgrade, Ilic immigrated to Chicago in 1991.