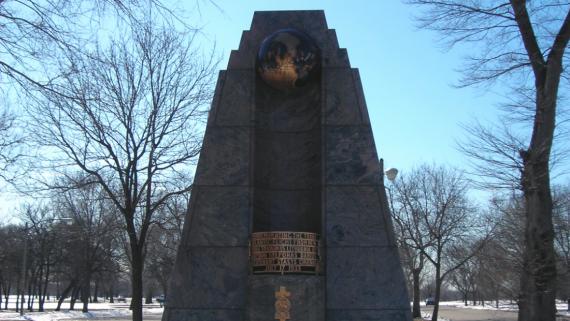 This Art Deco style monument honors two Lithuanian-American pilots who died during an attempt to fly from New York to Lithuania in 1933. Captain Stephen Darius and Lieutenant Stanley Girenas had begun planning their daring trans-Atlantic adventure in the 1920s after returning from fighting for the United States against Germany in World War I. Unfortunately, their mission failed. The “Lituanica” crashed in Northern Germany, just 400 miles from their intended destination of Kaunas, Lithuania. Darius and Girenas both died on impact and the Lithuanian government gave them a state funeral.

Several months after the tragedy, the Lithuanian consul in Chicago decided to commission a monument to the two aviators. A committee selected Chicago architect Charles B. Koncevic (1909–2000) and sculptor Raoul Josset (1900–1957) to design the Art Deco-style memorial, which was funded through a popular subscription program. The sleek, modernistic, polished granite structure includes a bronze globe that outlines the flight path. The artwork also includes plaques providing information about the flight and portraits of the aviators.

A crowd of forty thousand people gathered for the dedication of the Darius and Girenas Memorial in July of 1935. The events of the day included a military parade with a drum and bugle corps, and songs performed by the choirs of eleven different churches.

In the late 1990s, the Chicago Park District restored the artwork. Today, Marquette Park's Darius and Girenas Memorial is considered noteworthy not only for marking an important event in Lithuanian American history but as one of the few Art Deco-style memorials in Chicago.