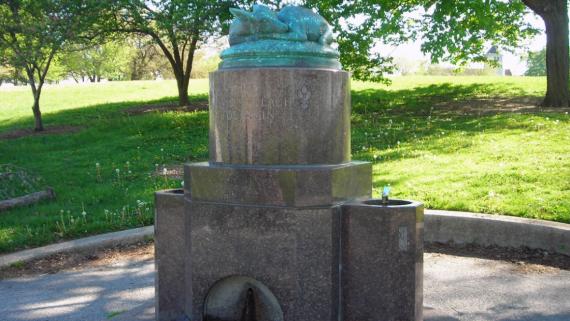 When David Wallach—a south side resident who owned a successful photographic supply business—died in 1894, he left money in his will for several Chicago charities. As a horse-lover, Wallach had provided $5,000 to commission a fountain in Burnham Park to provide refreshment for “man and beast.” After a long delay, sculptors Elisabeth Haseltine Hibbard (c. 1894-1950) and Frederick C. Hibbard (1881-1950) were commissioned in the 1930s to create the fountain. Although the monument did not include a horse trough, it has a pool for birds and dogs and drinking fountains for children and adults. Frederick Hibbard created the elegant polished marble fountain. His wife, Elisabeth, sculpted the bronze fawn that graces the top of the fountain.

Frederick and Elisabeth Hibbard had both studied art at the School of the Art Institute of Chicago with the renowned sculptor Lorado Taft. Elisabeth went on to teach art at the University of Chicago from 1943 until 1950. Especially well-known for her animal figures, she had also created some wooden bird and squirrel sculptures that were once located on the Wooded Island in Jackson Park. Elisabeth Haseltine Hibbard modeled the Wallach Fountain’s fawn after a doe that she had seen at the Lincoln Park Zoo. An exact replica of her Wallach fawn sculpture sits in the Memorial Cemetery in Davenport, Iowa.