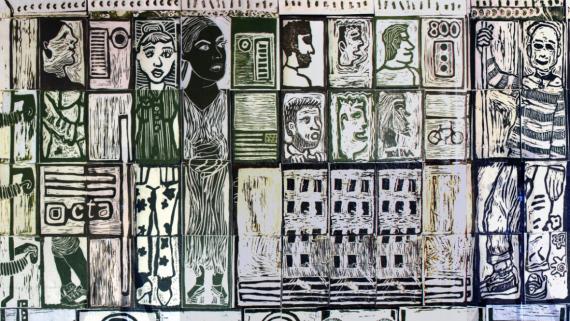 This graphic mural is displayed in the hallway of the Davis Square Park field house. The artwork was made by a group of local teenagers, who worked with an art instructor to learn the printmaking process. In this method, the students created their designs on pieces of leather or metal. Using a special printing press, the images were then transferred onto individual pieces of paper.

In total, the students created nearly two hundred small prints that come together to form the overall composition. The theme of the work is a ride on one of Chicago’s ‘L’ trains. Two separate train cars are portrayed, connected by looped coils depicted at the center of the mural. The train’s wheels roll along an imaginary track, guided by the conductor, who appears at the far right of the composition. Inside the train, many faces and signs are tightly packed within the space. Several Chicago Transit Authority logos are included, as is a banner marking the Back of the Yards neighborhood, in which Davis Square Park is located. In addition to the many fragmented faces and legs, several figures are depicted in full-length view. A few of these people grasp polls or handles during the ride.

Other details, such as the repetition of black squares against a white background, give the impression of city buildings whizzing by. The composition is therefore a playful hybrid of interior and exterior elements, which capture the full experience of a day on the rails.