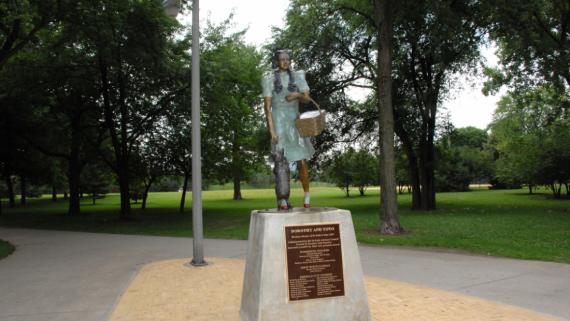 South of W. Orchard Street and west of Dorothy’s Playground

The Oz Park Advisory Council raised $60,000 for the Dorothy and Toto sculpture, the fourth and final artwork in the park. The group commissioned John Kearney to produce the entire group of sculptures depicting the most recognizable characters from L. Frank Baum’s The Wonderful Wizard of Oz. Published in 1900, the book provided the basis for the classic 1939 film. In all, L. Frank Baum (1856–1919) wrote a total of fourteen books in the Oz series, with Dorothy Gale and her dog Toto as key figures in most of them. This sculpture of Dorothy and Toto was installed in Oz Park in the spring of 2007.

Even before John Kearney (b. 1924) officially received the commission to design Dorothy and Toto, he had already started the wax molds for this final sculpture in the Oz Park. Kearney employed the lost wax technique to cast the bronze figure of Dorothy with Toto at her feet. In this method, the sculptor creates a wax mold that is dipped into a ceramic material and allowed to dry. Once dry, the sculptor melts the wax out of the ceramic elements through small holes and then pours molten bronze into the space where the wax once was, allowing every small detail to be cast. After the bronze has set, the sculptor chisels away the ceramic. He or she then refines the details on the finished cast bronze sculpture. At the end, the sculptor adds a patina, and in this case paint, to achieve a certain color because Kearney depicted Dorothy in a blue dress and wearing her iconic ruby red shoes.

Gallery:
Oz Park: Dorothy and Toto
Date Posted: 7/28/2015 Kearney used muted colors for all of the elements of Dorothy and Toto except for the vibrant ruby…
Advertisement