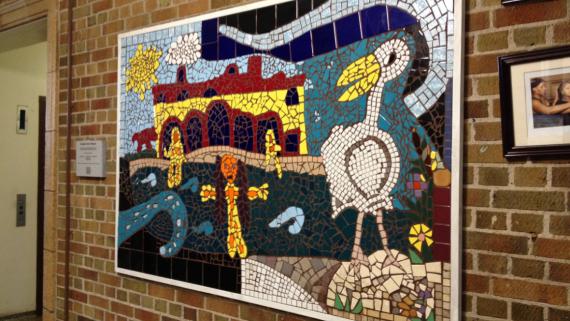 This colorful mosaic was one of several artworks produced in the late 1990s and early 2000s through the Chicago Park District’s Mosaic Parks Project. Although it lasted only a few years, the project supported the production of new mosaics in several Chicago parks, including Anderson, Douglass, Fuller, Ogden, Seward, and Washington.

Douglass (Anna & Frederick) Park mosaic was created by art instructor Victor Velez with the assistance of five students. The work depicts a summer day at Douglass Park, including the field house with its signature arched windows. Just in front of the building, several blue and turquoise waves represent the park’s pool. The scene also includes three figures, one of whom looks out directly at the viewer. To the left, a giant white bird with a distinct yellow beak stands on a sandy bank. Douglass Park's lagoon system and dense tree canopy make it a popular destination for bird watchers during migratory seasons. Bird watching is just one of the many fun activities that the public can enjoy during a visit to the park.