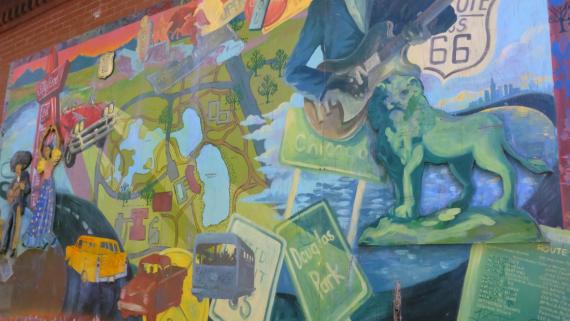 Painted on panels and mounted on Douglass Park's maintenance building, this mural celebrates the history of Route 66 and its connection with Chicago and the park. Established in 1926, Route 66 served as the nation's first highway that extended between Chicago and Santa Monica, California. Today, the iconic roadway is no longer a highway, but has been designated as a National Scenic Byway. The mural depicts imagery related to the beginning of the historic route at Chicago's Grant Park including of iconic Lions in front of the Art Institute, the skyline, and Lake Michigan. The mural also incorporates a map of Douglass Park, road signs, cars, a blues musician and Mariachi dancers.

Created by students, this mural was produced through cooperative efforts between the Chicago Park District, Chicago Public Schools, and the Lawndale Theater and Visual Arts Experience. The project received funding from the Joyce Foundation.