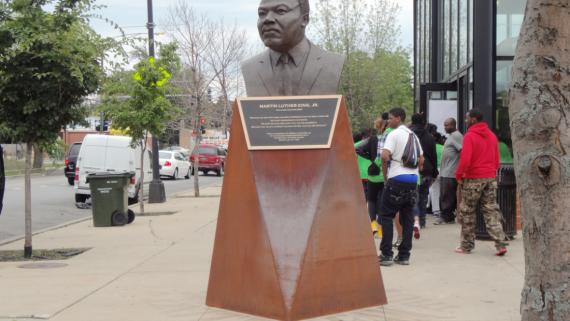 Outside entrance to family entertainment center

Clergyman, activist, and leader of the Civil Rights Movement, Dr. Martin Luther King, Jr. (1929–1968) had strong ties with Chicago. He helped launch a campaign called the Chicago Freedom Movement to create opportunities and improve living conditions in minority neighborhoods. He brought national attention to the need for housing reform by moving his own young family to the city's depressed West Side in 1966. After his assassination two years later, Chicagoans grieved deeply for Dr. King.

This sculptural Dr. Martin Luther King, Jr. Bust is located in front of new recreational facility recently named by the Chicago Park District in his honor. Its sculptor, Tina Allen (1949–2008) was inspired by Dr. King’s “lasting contributions to American life and the universal admiration of his significant quest for justice and human rights.”

For Allen, producing lifelike sculptures of important figures could be likened to “writing our history in bronze.” She believed that it was particularly meaningful to make sculptures of recognizable people of color. The artist was especially devoted to memorializing individuals who worked to ensure justice, freedom, and equality for all people. The $20,000 sculpture was funded through donations from the 17th Ward Democratic organization and the St. Sabina Outreach Ministry, and support from the Chicago Park District.