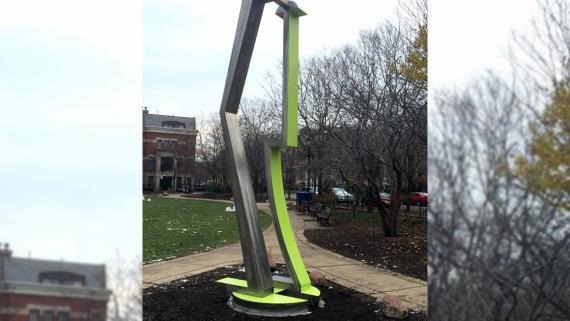 Southwest corner of the park inside entrance.

Artist's Statement: Duo United belongs to a group of recent sculptures named the Vector Series.  Four linear forms were created, two with straight architectural lines and two with curved organic lines that fit within a defined rectangular box.  Focusing on simplicity, with a balance of positive and negative forms, a combination of two to four of these units mounted on a circular base can yield a multitude of striking sculptures.  A modest use of one color, usually a lime green, plays off of the sparkling stainless steel surfaces.

Duo United uses two of these linear forms that posed together have a subtle figuration. The changing shapes of the negative spaces create radical evolving forms as the viewers move around the sculpture.