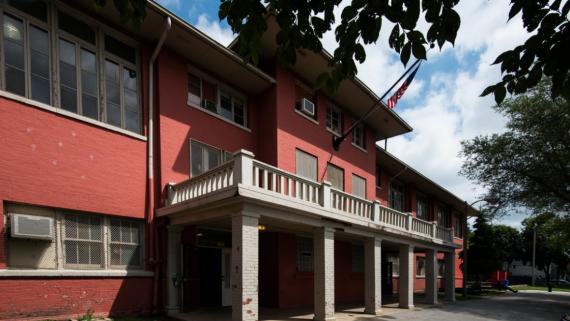 The auditorium at Dvorak

Fun in the pool at Dvorak Park 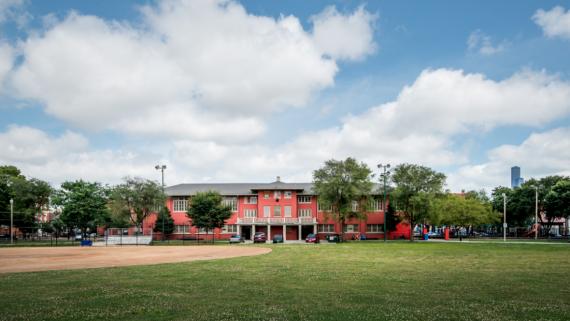 Fields for outdoor fun at Dvorak

We Are Hip Hop festival

The gym at Dvorak

Located in the Pilsen community, Dvorak Park totals 6.56 acres. Inside, the park features an auditorium, two gymnasiums, a computer room, an art room, meeting rooms and a kitchen. Outside, Dvorak Park offers a swimming pool and interactive water feature, baseball fields, an athletic field for football and soccer, playgrounds and a picnic area.

Young park-goers enjoy coming to Dvorak Park for baseball and seasonal sports at the facility. The park offers theater and performance arts classes, as well as special events, for older kids and teens in partnership with its Arts Partner in Residence, ElevArte. Adults come to Dvorak Park to participate in a range of fitness activities, and parents bring their young children to Bitty Basketball, Mighty Fit Kids and other programs for younger children.

Dvorak Park also serves as the site for many community festivals, including Mexican Independence Day, Fiesta Del Sol and the annual Annual Dia de Los Muertos and We Are Hip Hop festivals. Dvorak Park hosts several fun events for the whole family throughout the year, such as Movies in the Park, the annual Pumpkin Patch, Hispanic Heritage celebrations and other Night Out in the Parks special events.

In 1907, during an era of major political reform, the West Park Commission acquired land and began creating its first three neighborhood parks, Dvorak, Eckhart, and Stanford Parks. These were inspired by a revolutionary system of parks that opened in 1905 to provide breathing space and social services to overcrowded immigrant neighborhoods on Chicago's south side.

The need for such facilities was even greater on the west side. Because of this population density, the commissioners could only acquire small pieces of property. Dvorak Park was originally only 3.85 acres in size. In recognition of the area's large Bohemian population, the West Park Commission named the park for Anton Dvorak (1841-1904), the famous Czech composer.

Jens Jensen, then the West Park Commission's general superintendent and chief landscape designer, developed the original plan for Dvorak Park. Jensen included all of the major components introduced in the south side neighborhood parks: swimming and wading pools, changing rooms and shower baths, an athletic field, a playground, outdoor gymnasiums, and a fieldhouse.

Unlike the south side parks, Jensen's neighborhood parks included children's gardens and Prairie-style architecture. Dvorak Park's fieldhouse and bathhouse were designed by William Carbys Zimmerman, who then served as State Architect. In 1998, the Chicago Park District expanded the park by acquiring an adjacent parcel of land. The expansion includes a new walkway and soccer fields.

Movies in the Parks at Dvorak

We Are Hip Hop Festival at Dvorak