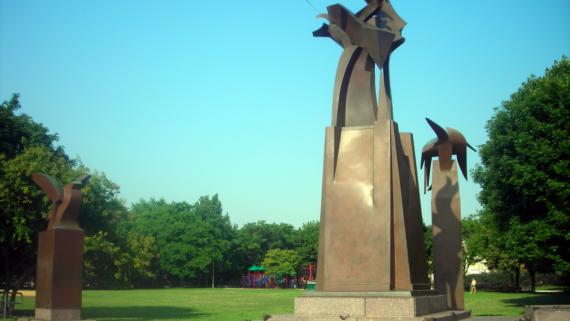 Prominently located at the corner of Wrightwood and Sheffield Avenues, this contemporary sculpture features abstracted eagles that appear to be rising from bronze pylons. Sculpted by Richard Hunt, the Eagle Columns memorializes politician John Peter Altgeld and poet Vachel Lindsay, two individuals who played a prominent role in Illinois history.

During the late nineteenth century, Illinois Governor John Peter Altgeld (1847–1902) made a decision of conscience that essentially destroyed his career. Soon after Altgeld’s inauguration, his law partner, Clarence Darrow asked him to review the cases of the anarchists who had been blamed for the Haymarket Riot of 1886. Altgeld became convinced that the men had been unfairly convicted of murder, and despite public outcry, he pardoned the three living “bombers” in 1893. Altgeld received harsh criticism even after his death. This sentiment finally changed in 1913, when Vachel Lindsay published “The Eagle that is Forgotten, ”a poem that prompted many citizens to recognize the previous governor as a forgotten hero. As a result, a figurative sculpture of Altgeld was erected in Lincoln Park in 1915.

In the late 1980s, after many decades in which few sculptures were placed in any of Chicago’s parks, a grant from the National Endowment for the Arts and donations from local residents funded this sculpture by internationally-recognized artist Richard Hunt. Born and educated in Chicago, Richard Hunt (b. 1935) lives and works out of a large converted street car barn near the park and monument. Hunt believes that sculpture has an important role within the community. He has asserted: “Public sculpture responds to the dynamics of a community, or of those who have a use for sculpture. It is this aspect of use, of utility, that gives public sculpture its vital and lively place in the public mind.”

In 2008, the Wrightwood Neighbors Association began working with the Chicago Park District to conserve the monument which had deteriorated and been damaged by skate boarders. Richard Hunt consulted on the conservation project and the Eagle Columns were rededicated in June of 2010.