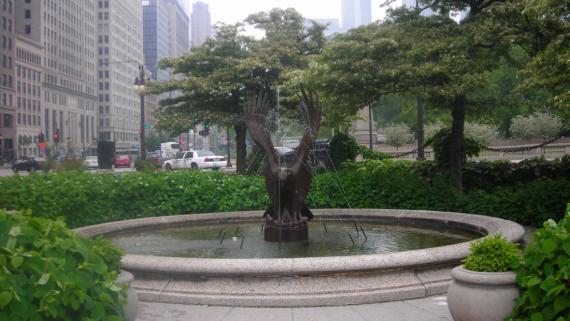 Flanking the north and south sides of Congress Plaza are twin fountains with circular pools. In the center of each, a bronze eagle with a fish in its talons appears as though it is about to take flight. Frederick C. Hibbard created the sculptures in 1931, as the South Park Commissioners were completing Congress Plaza, the elegant gateway into Grant Park and the lakefront. The sculptural fountains and other landscape improvements were made in time for A Century of Progress—Chicago’s second World’s Fair—which took place in adjacent Burnham Park in 1933 and 1934. Although the eagles look very realistic, their verticality and stylized angular lines relate to the Art Deco style that characterized much of the architecture and sculpture at the fair.

Born and raised in Canton, Missouri, Frederick Cleveland Hibbard (1881–1950) studied electrical engineering at several universities in Missouri and at the Armour Institute of Technology in Chicago (later renamed the Illinois Institute of Technology). While working in Chicago as an electrician, Hibbard decided that he wanted to become a sculptor. He enrolled at the School of the Art Institute and went on to have a successful career producing over seventy works of permanent sculpture, including two monuments to the Confederate president Jefferson Davis. His work in the Chicago parks includes bas-relief panels on the facade of the Calumet Park field house, the David Wallach Fountain in Burnham Park, the Greene Vardiman Black Memorial in Lincoln Park and the Garden Figure in the Lincoln Park Conservatory.