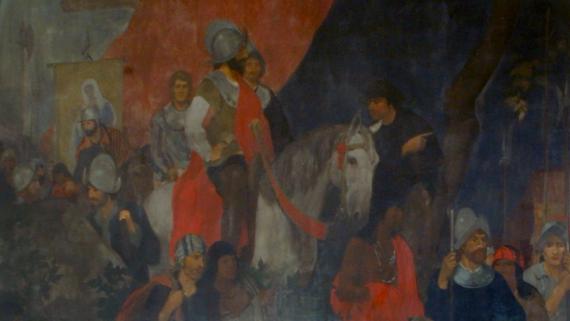 John Warner Norton (1876–1934), one of America’s preeminent early-twentieth-century muralists, completed Fuller Park’s Early Explorers Series in 1915. Norton had an interesting background. Born into a prominent family from Lockport, Illinois, he studied law at Harvard University until he was forced to quit after his parents suffered financial losses. He briefly trained at the School of the Art Institute of Chicago, but then headed west and worked as a cowboy for one year in Arizona. Norton then served as a member of Theodore Roosevelt’s Rough Riders during the Spanish American War.

Returning to Chicago in 1899, Norton re-entered the School of the Art Institute and began studying under several noteworthy teachers, including John Henry Vanderpoel. Norton began his own teaching career as an instructor of children’s classes at the Art Institute while he was still enrolled there. After completing his degree in 1901, Norton found work as an illustrator, married fellow student Margaret Washburn Francis, and traveled to the Southwest, where he produced paintings for the Santa Fe Railroad. The couple later settled in Chicago, and within a few years Norton became the head of the School of the Art Institute’s mural department. He and others believed that murals not only provided attractive enhancements to otherwise bare interior walls but also a powerful way to educate the public. Many of Norton’s murals feature themes related to American history.

The panels at Fuller Park depict four European explorers of North America in the sixteenth and seventeenth centuries. Three of the men were French: Jean Ribault ((1520–1565), a naval officer who led an expedition to the New World and helped colonize Florida; Daniel Greyson Duluth (1636–1710), a fur trader and explorer who searched for a connection between Lake Superior and the Pacific Ocean; and Robert Cavelier de La Salle (1643–1687), an explorer of the Great Lakes area, Mississippi River, and Gulf of Mexico who claimed the Mississippi Valley for France. The fourth subject, Spaniard Álvar Núñez Cabaza de Vaca (c. 1490–c. 1557), led an expedition to Florida and also traveled to what is now the American Southwest. Norton portrayed the historical figures in exquisite scenery representing the diversity of landscapes throughout our nation. Art historian Jim Zimmer explained: “Although Norton’s subject matter was historical in nature, his stylized treatment of the figures and backgrounds provide a fresh presentation in comparison with other examples of American mural painting at this time.”

The Early Explorers Series murals were made possible by the Art Fund that had been established in 1909 by Judge John Barton Payne, who served on the South Park Board of Commissioners for fifteen years. Through this fund, Norton also produced another series of murals for Hamilton Park. The fund also provided opportunities for Norton’s students to paint murals in Calumet, Davis Square, Gage, and Sherman Parks.