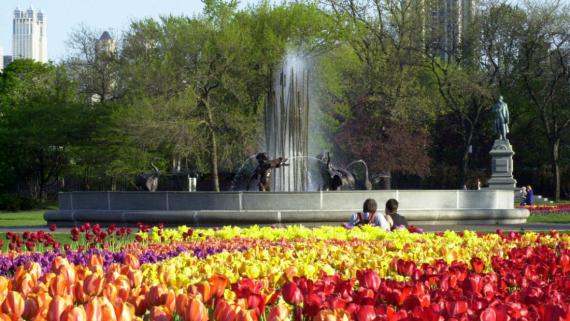 East Side of N. Stockton Drive and south of Lincoln Park Conservatory

Eli Bates (1806–1881), a wealthy Chicago businessman, bequeathed money for two sculptures in Lincoln Park—Lincoln: The Man (often called the Standing Lincoln), and a decorative fountain. Officially named for its donor, the Eli Bates Fountain, also known as Storks at Play, serves as the centerpiece of the formal garden just south of the Lincoln Park Conservatory.

Internationally acclaimed artist Augustus Saint-Gaudens (1848–1907) and his assistant Frederick William MacMonnies (1863–1937) collaboratively produced the sculptural fountain. In 1880, Saint-Gaudens first hired MacMonnies as an errand boy, soon promoting him to studio assistant. Several years later, McMannonies left Saint-Gaudens's stidop to study at the École des Beaux-Arts in Paris. While still in France in 1886, the young artist received the Prix d’Atelier, a prestigious award for foreigners. The following year, as Saint-Gaudens began work on Lincoln: The Man, he simultaneously had the commission for the decorative fountain. Saint-Gaudens had MacMonnies work closely with him on the Eli Bates Fountain. After this project, MacMonnies continued to produce art in Paris and America, including major sculptures for the 1893 World’s Columbian Exposition in Chicago such as the central fountain known as The Grand Barge of State.

The Eli Bates Fountain is composed of a circular granite basin with whimsical bronze birds spewing water from their beaks; half boy-half fish creatures holding large fish that appear to be splashing in the water, and tall bronze reeds and cattails protruding from the center. Architects McKim, Mead, & White designed the circular basin, while Mitchell Granite Company provided stone, and J.L. Mott Ironworks made the nozzles. Augustus Saint-Gaudens and architect Stanford White came to Chicago in the spring of 1887 to personally set the bronze elements. Although the original bronze reeds and cattails were missing for many years, a recent conservation treatment resulted in the recreation these elements.