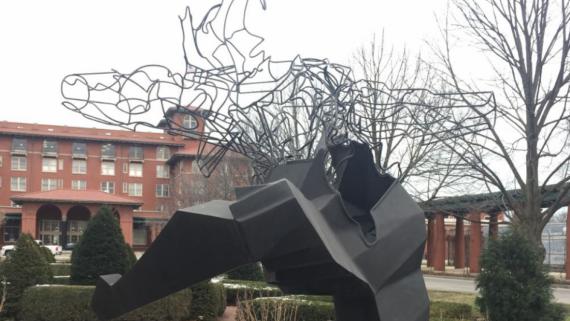 On lawn in front of field house.

Artist's Statement: My current body of work focuses on the abstraction of the human form and how it conveys a complex and layered language. I do this by combining three primary intellectual and formal trajectories/influences.

As bodies interact in space, they create an unspoken and obscured language, yet for the most part, this information is lost in the distractions of life. I seek to capture those moments so we can rediscover energies we put out into the world. Boccioni ‘s “Unique Forms of Continuity in Space” and its ability to imply motion while capturing a static moment is an example of this that has been influential for me. As my work has developed, a common comment from viewers is that I am taking a Cubist approach to my re-envisioning of the human form because of my use of angular lines and repetition of forms. I agree that at the beginning of my process I act as the Cubists and flatten my space/forms, I do this by defining a graphic silhouette that captures the body in motion. I then define the subtleties that reside in the transitions between bone and muscle, torso and limbs, line and mass. But unlike the Cubists, I extrude the articulated silhouette back into a three-dimensional mass that can be pushed and pulled to exaggerate and communicate a sense of motion and weight.

Now that I have tangible form, I find myself relying on my second influence. Growing up within the ceramic community, I was exposed to the myriad of possible manifestations of a clay object. More often than not, the one commonality of these objects housed an interior which leads to the notion that these objects are vessels, both in a literal fashion and in the abstract.

Within my work the idea of an implied but unknown interior, drawn from the idea of the vessel in ceramics, reveals my third influence. I have always had a strong interest in the impact of technology on the human condition and how this filters our awareness of ourselves. This focus also includes the fascination with the imagery of the future and how it can embody both hope and fear, and the question: are we losing our perception of self? To infuse these ideas into my sculptures, I rely on the traditional and futuristic feel of materials such as steel, stainless, bronze and glass. By using the signifiers found in the environments that we occupy (fixtures, portals, bolts, tubing, screens, etc.) my intentions are manifested by the cover plates that act as portals, revealing that these figures are, in fact, vessels.

Through a combination of these trajectories, as well as my dedication to craftsmanship, I have developed an abstract language that hides the obvious signifiers of the human form and allows the cloaked intentions of the figure to be revealed. The result is best seen when the forms are located within the public realm, where they mingle with others and begin the subtle conversations that only the subconscious can hear.