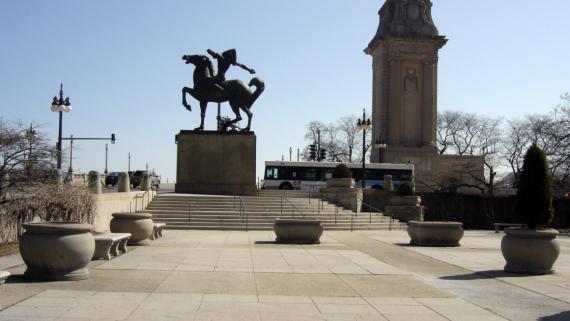 Flanking Congress Plaza, these powerful male figures on horseback provide an idealized portrayal of Native Americans. Commissioned by the B.F. Ferguson Fund, the Equestrian Indians were created by Ivan Metrovic (1883–1962), an internationally-renowned Croatian sculptor who had come to Chicago in 1926, when the Art Institute presented an exhibition of his work. Born in the Kingdom on Croatia- Slavonia, Mestrovic grew up in the mountains of Dalmatia where he worked as a shepherd and as an apprentice to a stone mason. After a second apprenticeship with a marble carver, Mestrovic received a scholarship from the Academy of Arts in Vienna during the famous Secession Movement. After completing his studies, he began to exhibit his works in major European cities and soon gained international attention. Mestrovic became friends with the French sculpture Auguste Rodin, who considered the much younger Croatian artist a genius.

For the Congress Plaza commission, Mestrovic had considered sculpting a cowboy and an Indian, but he decided that two Native Americans would be a more poignant symbol “to commemorate the tribes that once roamed the Illinois prairies.” He cast the artworks in Zagreb, Croatia. Mestrovic commented that although the horses look more like breeds from his homeland than “American prairie warriors,” they capture the vitality of Chicago. The colossal sculptures are seventeen feet tall and on their pedestals, which were designed by architects Holabird & Roche, they reach a height of thirty five feet.

The equestrian figures are poised to shoot an arrow and throw a spear; however, neither of them holds a weapon. Although some Chicagoans believe that the bow and spear were removed from the sculptures during renovations, these objects were actually never part of the sculptures. In fact, the sculptor purposefully omitted the weapons, leaving them to the viewer’s imagination.