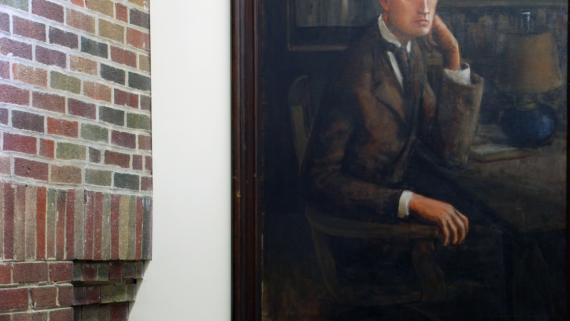 Portrait of Eugene Field honors the famous writer and poet for whom the park is named. Born in St. Louis, Eugene Field (1859–1895) worked for several western and midwestern newspapers before he was recruited in 1883 by the Chicago Daily News to write a humor column entitled “Sharps and Flats.” He received acclaim not only for his column but also for many children’s stories and poems such as ‘Little Boy Blue,” “Wynken, Blynken, and Nod,” and the “Gingham Dog and the Calico Cat.” By the time of his death, Field was considered the children’s poet laureate of America.

Josh Holland (1921–2011) painted this portrait in 1941 in a style that, while realistic, emphasizes Field’s face and hands through elongation and pronounced color. Born Joshua Zalman Holland, the artist was a man of many achievements. The son of Russian Jewish immigrants who settled in Chicago, he began taking classes at the School of the Art Institute of Chicago at a young age. In 1937, he received a scholarship to the University of Chicago where he studied mathematics. This did not deter Holland from studying art and exhibiting his work. In 1940, he contributed a self-portrait to the 44th Annual Exhibition by Artists of Chicago and Vicinity. Several years later, he exhibited work at a graphic arts exhibit presented by the Hyde Park Club of the Jewish Community Centers. Holland also taught sketching at the club.

During World War II, Holland served as a meteorologist with the Army Air Forces based in Guam. He was part of a military team that analyzed Japan’s weather patterns. After the war, he served as an advisor on the construction of nuclear power plants and was involved with early federal studies of the biological effects of fallout. He worked for the Atomic Energy Commission in the 1960s, and then joined the National Oceanic and Atmospheric Administration. Later, he taught at the University of Maryland and worked as a consultant. Throughout his long and impressive scientific career, Holland continued to draw and paint. A number of his works are on display at government office buildings in Washington, D.C. The Washington Post asserted that “Dr. Holland’s paintings had a classical simplicity that suggested the quiet emotional undercurrents of Paul Cézanne and Edward Hopper.”