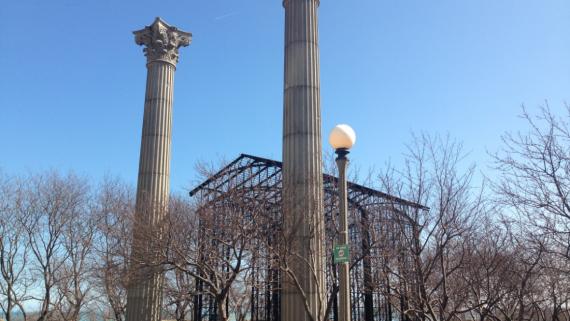 Located at the entrance of Cancer Survivor’s Garden, south of E. Randolph Street on axis with N. Field Boulevard

In 1964, the United States General Services Administration announced plans to demolish Chicago’s historic Federal Building and replace it with a modern complex designed by Ludwig Mies van der Rohe. This decision was made despite a Department of the Interior report that deemed the earlier building architecturally significant, structurally sound, and “capable of serving a useful purpose for many years.” The elegant 1905 Beaux Arts style Federal Building had housed many of the same functions that would be provided by the new facility—a courthouse, post office, and offices for employees of the federal government. American architect Henry Ives Cobb designed the building which had a series of Corinthian columns lining the upper porticos beneath a massive domed rotunda.

When the structure came down in the mid 1960s, members of the newly-founded Chicago Architecture Foundation salvaged two of the buildings massive columns. They remained in storage until 1996, when the Chicago Park District incorporated these fragments into the design for Grant Park’s Cancer Survivor’s Garden, which was funded in part by a gift from Annette and Richard Bloch. The forty-foot-tall columns are on axis with the classical columns of the Field Museum of Natural History located at the far south end of Grant Park.