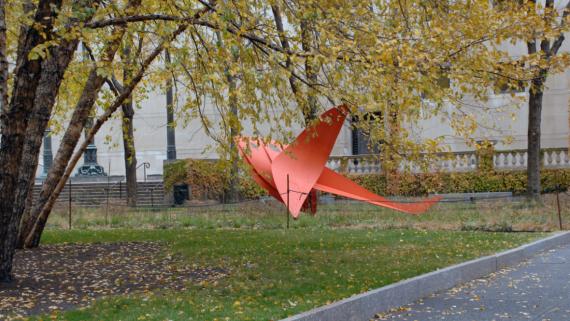 This sculpture was the first to be added to the north garden of the Art Institute after landscape architect Laurie Olin redesigned the area in 1991. It is the work of celebrated American artist Alexander Calder (1898–1976). Although Calder is best known for his small mobile sculptures, the monumental work he produced near the end of his career should not be overlooked. Flying Dragon, which Calder executed in 1975, is considered a stabile. Unlike Calder’s famous kinetic mobiles, his stabiles are stationary sculptures made of fixed elements, although they are dynamic and animated in their appearance. The artist coated the stainless steel Flying Dragon in his signature red-orange color, which he also used for his giant Flamingo in Chicago’s Federal Court Plaza. Calder’s work spanned about fifty years.

In addition to many monumental public sculptures dating to the end of Calder’s career, several pieces that broadly represent the full scope of his work can be seen in Chicago in the collection of the Museum of Contemporary Art. Flying Dragon is thought to be the last stabile that Calder personally created. Completed in 1975, the artist died less than a year later at the age of seventy-eight. A gift of Mr. and Mrs. Sidney L. Port made this acquisition possible for the Art Institute of Chicago.