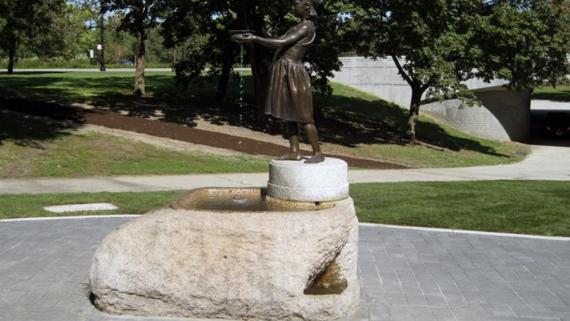 She now has a voice.  Learn about the teen writing competition that gave her that voice.
Make sure to visit the statue in Lincoln Park with your smart phone to hear her story.

In the late nineteenth century the Woman’s Christian Temperance Union (WCTU) urged its members to create public fountains throughout the world to provide “pure drinking water” as an alternative to liquor. The organization’s Juvenile Division sponsored a program in which 350,000 children from dozens of countries signed abstinence pledges. Children also donated pennies and nickels for a decorative drinking fountain that would be displayed at the 1893 World’s Columbian Exposition in Chicago. They raised $3000 and the WCTU commissioned English artist George Wade (1853–1933) to create the Fountain Girl, which is also known as the Little Cold Water Girl and the Frances Willard Fountain.

Wade produced a bronze figure of a young girl wearing a simple dress and standing in bare feet. With outstretched arms, she held a chalice that resembled the Loyal Temperance Union badge. Water trickled down from the bronze cup into a stone basin below. First installed near the WCTU booth at the World’s Columbian Exposition in Jackson Park, the fountain provided refreshment to people, horses, dogs, and birds during the 1893 fair.

In 1895, two years after the World's Fair, the WCTU moved the fountain to the Woman’s Temple at La Salle and Monroe Streets. Later copies of the sculptural drinking fountain were installed in London, England; Detroit, Michigan; and Portland, Maine. After the demolition of Chicago's Woman’s Temple, the original fountain was moved to Lincoln Park near Lake Shore Drive and North Avenue in 1921. It remained there until the 1930s when its site was altered for the Lake Shore Drive reconstruction project. The bronze and stone fountain sat in storage for several years, until 1940, when the Chicago Park District moved it to a new location in Lincoln Park, just south of the W. La Salle Drive underpass. In the late 1950s, the bronze figure of the girl was stolen. The sculpture was never recovered, although its stone base sat untouched over the years.

In 2007, Lincoln Park resident and philanthropist Jeanette Van Nice began talking with representatives of the Chicago Park District and Lincoln Park Conservancy about providing funds to reproduce the missing sculpture. In addition to her generous donation, the State of Illinois, Chicago Park District, and Lincoln Park Conservancy contributed to the project. The Park District established a close working relationship with the City of Portland, Maine to allow for the reproduction of their sculpture. Conservator Andrzej Dajnowski made a mold of the Portland figure and oversaw its recasting in bronze. He installed the new sculpture on the original granite base in Lincoln Park in 2012. Landscape improvements include a plaza around the monument. Today, water drips from the cup of the bronze girl; however, it is no longer potable.