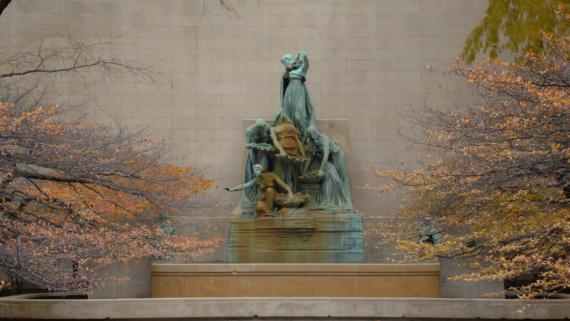 Located in the South Garden of the Art Institute of Chicago

In the late 1890s, acclaimed Chicago sculptor Lorado Taft (1860–1936) began envisioning a monumental fountain of nymphs and flowing water. In 1899, he had his female students create a temporary plaster model of a nymph fountain on the lawn outside of the Art Institute of Chicago to elicit responses from the public. Although some did not approve of the scantily-dressed female figures, others responded favorably. Mayor Carter Harrison said, “It is not in any sense objectionable. It is beautiful and artistic.”

A few years later, Taft followed the same theme to create the Fountain of the Great Lakes. Five bronze nymphs depicted in draped clothing represent each of America’s Great Lakes. Positioned in the same configuration as the Great Lakes, the figures each hold a shell and spill water to the next, emulating the flow of the vast Midwestern fresh water system.

Completed in 1913, Taft’s Fountain of the Great Lakes was the first commission of Benjamin F. Ferguson Fund, which had been established several years earlier to foster the placement of statuary and monuments along the boulevards and in other public places in Chicago. The fountain originally stood in front of the Art Institute’s old south wall. It remained in this location until 1963, when the Art Institute of Chicago completed its Morton East Wing addition. At that time, the Fountain of the Great Lakes was moved to a perpendicular position, adjacent to the new wing’s west wall. Unfortunately, sited at this location, the monument’s original bas-relief sculpture honoring art patron B.F. Ferguson is obscured from public view.

Fountain of the Great Lakes | Artwork