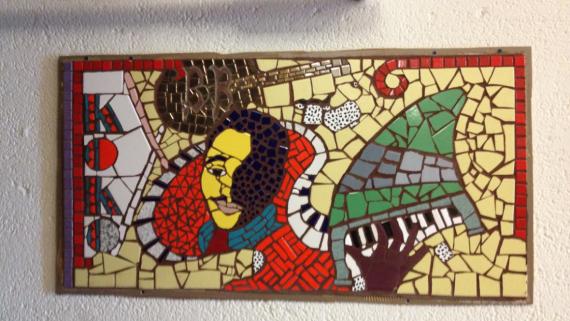 These colorful, broken-tile mosaic panels enliven the lobby of the Fuller Park field house. They were created during the summer of 1999 under the guidance of art instructor Millicent Gordon, who worked with local students to produce the designs.

The mosaics celebrate Chicago’s long tradition of blues music. The children chose this theme after meeting members of Willie Dixon’s Blues Heaven Foundation at a local festival. The father of the Chicago blues scene, Dixon created his foundation to educate the public about the blues. In one of the mosaics, Dixon is illustrated with his harmonica. Legendary singer Lena Horne appears to his left. Other singers and musicians depicted include B.B. King, Billie Holiday, and Koko Taylor. These representations are complemented by other blues motifs, such as music notes and instruments including a saxophone, a clarinet, and a bass guitar.

This series of mosaics was one of several artworks produced in the late 1990s and early 2000s through the Chicago Park District’s Mosaic Parks Project. Other mosaics of a similar style are on display at additional parks, including Anderson, Douglas, Ogden, Seward, and Washington.