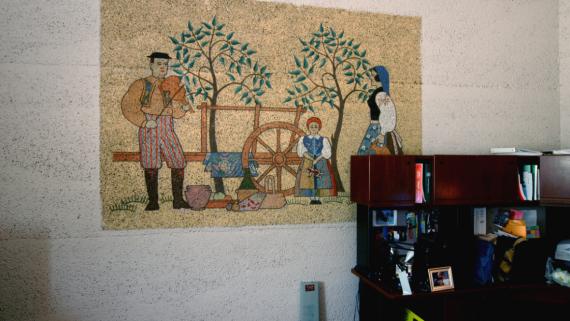 In 1926, the South Park Commission completed the construction of Gage Park’s field house at a time when the surrounding community was experiencing rapid growth. Immigrants from Austria, Czechoslovakia, Germany, Lithuania, and Poland settled in apartments and bungalows near the park and soon took advantage of the gymnasiums, public bathing facilities, branch library, and numerous cultural programs offered at the new field house.

A decade later, the difficulties of life during the Great Depression made the park facilities even more important to many Chicagoans. By that time, Gage Park was part of the newly consolidated Chicago Park District, and the citywide agency provided a substantial list of recreational programs. The arts and crafts division had headquarters in six parks, including the Gage Park field house, which served the south central part of the city. Offerings at Gage Park included model yacht and airplane making, woodworking, quilting, crocheting, and art club.

This mural was painted directly onto the wall of the old crafts room. It depicts an immigrant family in brightly colored traditional clothing. The father is playing the violin, while his daughter stands in front of a wooden cart, holding a rag doll. The mother is posed in profile, looking toward her husband. There are items related to a picnic in the foreground and two trees in the background.

The mural was likely painted by a Chicago Park District arts and crafts instructor in the late 1930s or early 1940s. A similar, though more extensive, mural is located in the tower room of the Pulaski Park field house, which was also a crafts room during the Depression era.