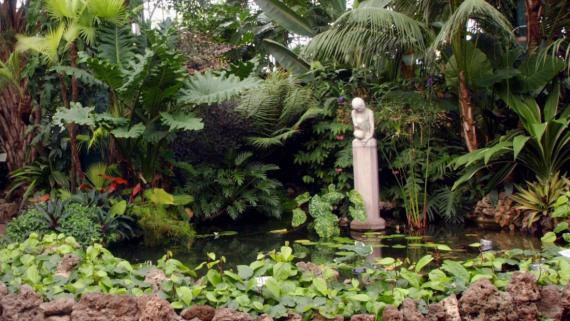 In 1930, sculptor Frederick C. Hibbard created an original plaster version of the Garden Figure for a South Park Commission garden exhibit. Sponsored by the Garden Club of Illinois, the garden show was held at Merchandise Mart. Frederick C. Hibbard (1881–1950) and his wife Elisabeth Haseltine Hibbard (c. 1894–1950) had both trained at the School of the Art Institute under the renowned sculptor Lorado Taft. They lived and shared a studio on the city’s South Side and had produced many artworks for nearby parks. These include the Wallach Fountain in Burnham Park (a joint project); the Eagle Fountains in Grant Park; bas-relief panels at the Calumet Park field house (by Frederick Hibbard); and small carved animals at the Japanese Garden which no longer exist (by Elisabeth H. Hibbard).

After seeing the original version of the Garden Figure, Robert Dunham, President of the Chicago Park District Board of Commissioners, agreed to personally pay $2,000 to have Frederick C. Hibbard carve a permanent marble version of the sculpture. Dunham donated the artwork to the Chicago Park District. Representatives of the Park District had planned to install this elegant figure of a young woman in an open shelter in Jackson Park (just north of the Museum of Science and Industry). Due to construction delays, the Park District instead placed it in the Palm House of the Lincoln Park Conservatory in 1940. With the room under renovation in the mid-1950s, the Park District placed the sculpture in storage for a brief period of time; the public reacted negatively to its temporary stint in storage, complaining about the “missing nymph.” The marble figure of a serene-looking woman was soon returned to the conservatory. The Garden Figure has enhanced the front entry of the Palm House ever since.

Gallery:
Lincoln Park: Garden Figure
Date Posted: 7/24/2015 Despite early plans to install the Garden Figure in an open shelter in Jackson Park, it has always…
Advertisement