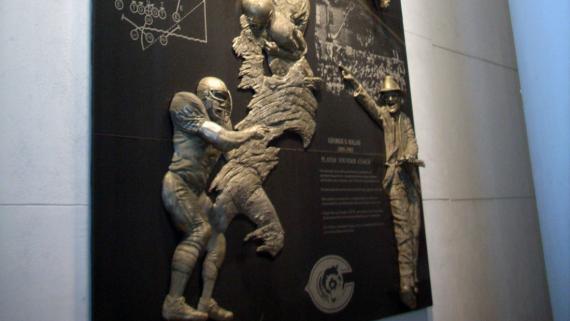 Located near Gate 15 at Soldier Field

Julie Rotblatt-Amrany (b. 1958) created this enormous bas-relief sculpture, composed of white bronze with laser etched imagery on black granite. Located in Soldier Field, the artwork pays tribute to sports legend George Halas (1895–1983) who founded the Chicago Bears and helped establish the National Football League. Born and raised on the West Side of Chicago, Halas played football for the University of Illinois in 1918 when the team won the Big Ten Football title. After a brief stint in professional baseball, he returned to football, playing with and coaching the Decatur Staleys in 1920. Before long, Halas became owner of the team and moved it to Chicago. After one season, he renamed the team the Chicago Bears. During his forty year reign as coach, the Chicago Bears won six world championships. After Halas retired from coaching, he continued as the team’s principal owner until he died in 1983. Today, the team is still owned and operated by the Halas family.

In 1991, Julie Rotblatt-Amrany and her husband Omri Amrany established an art studio in Highland Park, Illinois, where they create, teach, and collaborate with other artists. The Rotblatt Amrany Fine Art Studio has had many commissions, particularly for sculptures of important sports figures. These include The Spirit: Michael Jordan commissioned by the Chicago Bulls for the United Center, Harry Caray: A One, Two, Three at Wrigley Field in Chicago, and the Detroit Tigers sculpture at Tiger Stadium. The Amranys produced an additional bronze sculptural grouping for Burnham Park's Gold Star Families Memorial in 2010. Depicting a police officer in a wheel chair with his family, these figures are located in the "living sacrifice space."