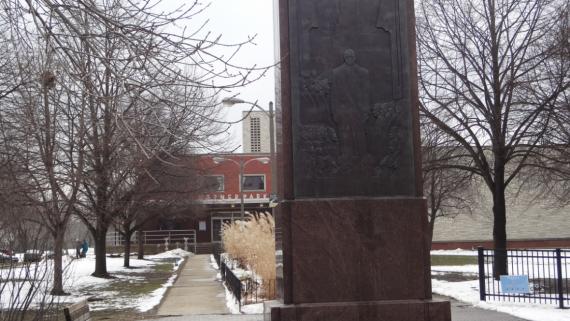 In 1948, sculptor John David Brcin completed the Governor Henry Horner Memorial, a red granite sculptural pylon in the Art Deco style. This design expression typifies the early 1930s, a period that was especially important in the life of the man for whom it honors. Henry Horner (1878–1940) is remembered as both a reform-minded judge of the Cook County Probate Court from 1914 to 1932 and as the state’s first Jewish governor, who served from 1933 until his death in 1940. Elected to govern Illinois in the throes of the Great Depression, he established the state’s sales tax laws to provide matching funds that would support federal relief programs.

The double-sided monument depicts the two stages of Henry Horner’s political career. One face focuses on his years as a probate judge. It portrays a blindfolded female figure of Justice holding weighted scales above Horner’s head. On the other side, Horner stands in front of the state capitol, representing his two terms a as Illinois governor. Images of the people of Illinois frame both sides of the monument.

To produce the monument, the group selected John David Brcin (1899–1983), a Serbian immigrant who had trained under Albin Polasek at the School of the Art Institute of Chicago. In 1920, Brcin was the youngest student ever to win the Bryan Lathrop scholarship, which allowed him to study art in Europe. First dedicated in 1948 in Grant Park near the Buckingham Fountain, the monument was relocated in 1956 after the Chicago Park District completed construction of a new park and field house named in Horner’s honor.