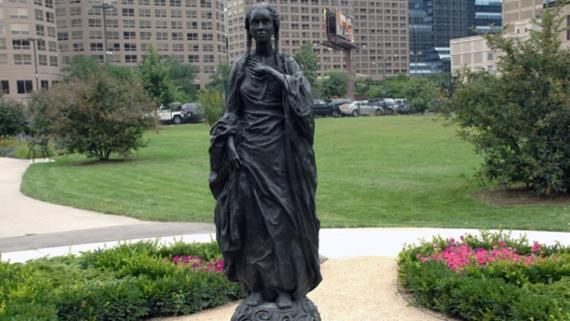 The city of Galway, Ireland donated "Grainne" to Chicago in conjunction with the Sister Cities International program. Mayor Richard M. Daley dedicated the sculpture along with Tom Constello, the mayor of Galway, in newly-created Heritage Green Park on August 21, 2007. A large delegation from Ireland, including the artwork’s sculptor, Maurice Harron, attended the unveiling.

Maurice Harron (b. 1946) describes "Grainne" — meaning “grace” in Gaelic — as the daughter of a chieftain that represents traditional pre-1600s Gaelic society. The depiction is based on an archaeological discovery of the remains of a young girl who had been preserved in a peat bog. The figure’s gesture makes reference to prehistoric sculptures in which women are shown with the left hand raised as a signal of blessing. The base of the sculpture is derived from the Turoe Stone, a pagan Celtic relic from about two thousand years ago.

Maurice Harron was born in Northern Ireland and studied at the Ulster College of Art & Design. In 1983, he began working as a painter and sculptor, and fifteen years later, he established his own studio and foundry. Herron has become well-known in the United Kingdom for his public sculptures, which are often large scale and produced from a variety of materials including bronze, stainless steel, stone and fiberglass. Harron won a competition to sculpt "Grainne."

Harron likes to address issues connected to social, historical and cultural identity — all of which are themes of "Grainne." The concepts related to the artwork resonate in Chicago’s new Heritage Green Park. The site and its artwork commemorate Chicago’s historical significance to Irish immigrants in America.