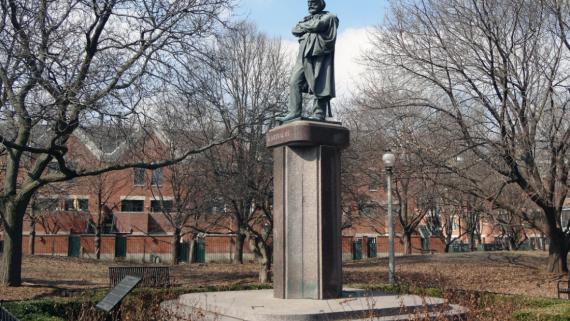 The Giuseppi Garibaldi Monument has had a long history in two of Chicago’s parks. In 1901, an Italian-American group, Legione Garibaldi, raised $12,000 for the statue, and had it installed on the east side of Lincoln Park near old Lake Shore Drive (now Cannon Drive.) The donors inscribed its rusticated stone base with the following Italian phrase, “Guerreggio per redimere e non par conquistare,” which means, “He fought wars for freedom, not for conquest.”

For well over a century, Chicago’s Italian community has had great reverence for Giuseppi Garibaldi (1807–1882) a “Redshirt” military strategist best known for his conquest of the Kingdom of Two Sicilies in 1860. This accomplishment marked an important step in the unification of Italy. Garibaldi was known as a stern and self-confident man and New York sculptor Victor Gherardi successfully portrayed these characteristics in his bronze figurative sculpture which stands with arms folded and a cape over his shoulders.

Despite rainy weather in Chicago on Columbus Day, October 12, 1901, approximately two thousand people attended dedication ceremonies for the monument. A parade began downtown and proceeded north along Dearborn Avenue to the monument in Lincoln Park culminating in patriotic music and short speeches by the president of the Legione Garibaldi and the vice president of the Lincoln Park Commission.

After its original dedication, the monument was moved two other times in Lincoln Park. Its third site, just southwest of South Pond, was selected in the 1930s, when Italian-Americans wanted the sculpture in a better location for their annual Garibaldi birthday celebration. It remained there for over forty years, when a group of prominent Chicagoans including Oscar D’Angelo asked to relocate it to what was then called McClaren Park in Little Italy. In 1976, the Park District and the City’s Department of Urban Renewal created improvement plans with a new site and base for the Garibaldi Monument. McClaren Park was officially renamed in honor of Garibaldi in 1979, and three years later, the bronze sculpture was moved to Garibaldi Park’s new granite pedestal. Unfortunately, the original sixty-three-ton stone base was left behind in Lincoln Park and it remains without a sculpture.