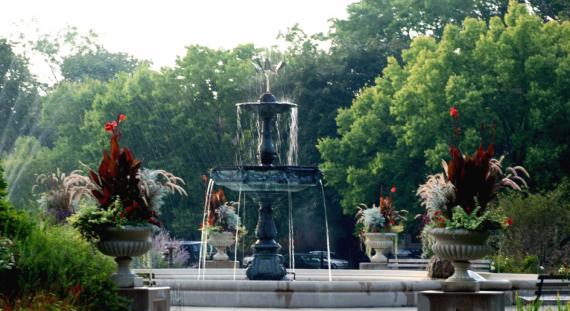 East of W. Damen Avenue and south of the field house

In the mid-1890s, the West Park Commissioners installed a cast-iron fountain in Wicker Park. The fountain had an a cut granite outer basin with finials and floral urns. Produced by J.L. Mott Ironworks Company, the two-tiered fountain featured foliage motifs and small gargoyle faces which spouted water. Because of the faces, the company named this the Gurgoyle Fountain.

In 1908, Jens Jensen, then the superintendent of the West Park System, decided to remove the fountain. Retaining the granite outer basin, Jensen replaced the ornamental fountain with a jet spray, converting the lower basin into a children’s wading pool.

At the turn of the twenty-first century, as community members became increasingly interested in the history of the park, the Chicago Park District hired the Robinson Iron Company to recreate the historic fountain. The Alabama-based company, which owns many of the old J.L. Mott pattern books and molds, used such resources to reproduce the original Wicker Park fountain. Since the completion of the recast Gurgolye Fountain in 2001, the Wicker Park Garden Club has worked closely with the Chicago Park District to add other historically-appropriate elements to the landscape, including urns and benches. The club plants and tends the floral installations in the urns, as well as lush gardens along the west side of the park.