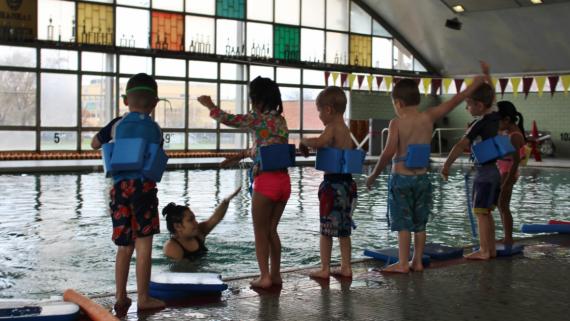 Learning to Swim at Harrison! 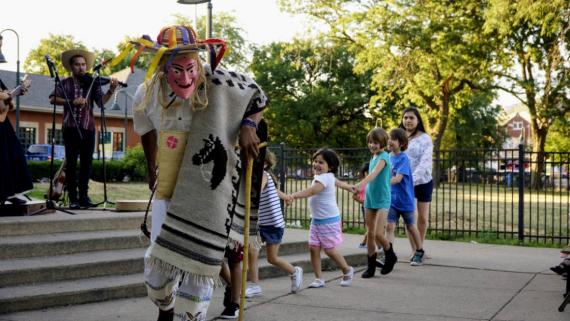 Night Out in the Parks fun at Harrison
Location:

Located in the Pilsen community, Harrison Park totals 18.58 acres and features a fieldhouse with a gymnastics center, an indoor swimming pool, a gymnasium, meetings rooms and a reception rotunda featuring a bust of Emiliano Zapata, one of the most prominent figures of the Mexican Revolution. Outside, the park offers tennis courts, basketball courts, baseball fields, a large artificial turf field that is used for baseball and football or soccer and a playground.

Many of these spaces are available for rental. Harrison Park is also located adjacent to the National Museum for Mexican Art and offers many cultural opportunities in partnership with the museum.

In addition to programs, Harrison Park hosts fun special events throughout the year for the whole family, such as Movies in the Park and other holiday activities.

The West Park Commission created Harrison Park in 1912 to provide breathing space and social services to the overcrowded and industrialized lower west side. The commission's first three neighborhood parks, Dvorak, Eckhart, and Stanford Parks, were so successful that the State passed a bill permitting additional neighborhood parks in 1909. (Stanford Park no longer exists.)

Within the next several years, other recreational features including children's gardens were added, however, the park did not have a fieldhouse until 1928. In 1950, the Chicago Park District expanded the intensively-used small park by acquiring a stone quarry at its western boundary.

During the following years, the neighborhood's Latino population grew, and in 1987, the natatorium was converted to the National Museum of Mexican Art. In 1993, a new state-of-the-art fieldhouse replaced the original facility.

The park honors one of Chicago's most popular mayors, Carter H. Harrison, Sr. (1825-1893). A native Kentuckian who settled near Union Park, Harrison served as mayor for five terms between 1879 and 1893. He was assassinated by a disappointed office seeker late on the day of October 28, 1893. Ironically, the day had been designated Mayor's Day in Harrison's honor because it marked the closing of the World's Columbian Exposition, Chicago's first world's fair. There is a monument to Harrison in Union Park.

3rd Tuesday of every month at 6 pm

The Goodman's Zulema at Harrison

Astronomy in the Parks at Harrison