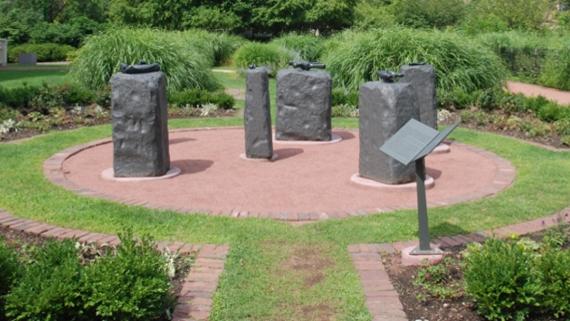 Commissioned by the Ferguson Fund of the Art Institute, the sculpture was produced by Louise Bourgeois (1911 – 2010), an internationally-acclaimed French-born artist who lived and worked in New York. Bourgeois created a series of carved black granite hands that sit on six rough-hewn stone pedestals. The hands symbolize the broad spectrum of people throughout the world whose lives Jane Addams helped to improve — spanning all races, ethnicities and backgrounds and ranging from the very young to the very old.

Michael Darling, a Chief Curator at Chicago’s Museum of Contemporary Art summarizes the significance of this work: “Louise Bourgeois is one of the most important and influential artists of the 20th and 21st century, primarily because she has addressed central aspects of the human condition in her work. Channeling the issues raised during her tumultuous childhood, she has focused her work on ideas about inter-personal communication, nurturing, alienation, belonging, motherhood, sensuality, birth and death, among many other themes. This sculpture is an excellent example of how she suggests these concepts in a truly universal form — through the motif of the human hand.”

The artwork’s installation in Jane Addams Memorial Park was low and difficult to view. From almost the beginning, "Helping Hands" suffered from vandalism at its lakefront location. In 2006, the sculpture was removed from Jane Addams Memorial Park. The Ferguson Fund shipped the damaged pieces to New York where the then-elderly artist re-carved them. After the artwork remained in storage for several years, the Chicago Park District and Art Institute worked together to relocate Helping Hands to Chicago Women’s Park in 2011. Mimi McKay, the landscape architect for Chicago Women’s Park, helped identify the new site for the sculpture within the park.

Prior to the completion of the project, Louis Bourgeois created a series of maquettes for Helping Hands. These included a series of full-sized plaster and bronze hands that served as studies for the final artwork. In 2012, the Art Institute transferred the maquettes to the Chicago Park District. To allow the public to view these fascinating studies, the Park District entered into a loan agreement with the Jane Addams Hull House Museum. The museum unveiled its exhibit of the maquettes on September 6, 2012, in celebration of Jane Addam’s birthday. The exhibit remains on display today.