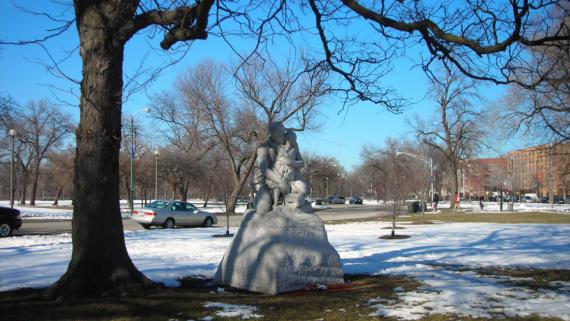 An Irish immigrant who settled in Chicago in 1885, sculptor Charles J. Mulligan (1866–1916) was known for conveying a sense of humanism through his artworks. This sculpture, known as Home or Miner and Child, captures the dignity of the American workingman. It depicts a coal miner tenderly embracing his daughter after he returned home from a hard day of work. Mulligan first exhibited a temporary version of this sculpture at the Pan American Exposition in Buffalo, New York in 1901.

The West Park Commission displayed the temporary version of Home in a 1909 outdoor art exhibition in Garfield Park. A magazine article of the period explained that the exhibit was motivated by members of the Municipal Art League of Chicago, the West Park Commission’s Board, and officials of the Art Institute who believed that statues of war heroes did not belong in the parks. Under the direction of visionary landscape architect Jens Jensen, the outdoor exhibits in 1908 and 1909 were meant to present a “more fitting form of public art for the parks…the kind that has a decorative beauty appropriate to its site and surroundings, and a meaning in itself that the person of average intelligence may read without the aid of a guidebook.”

Home was so well received that in 1910 the West Park Board commissioned Mulligan to carve a permanent version of the sculpture in white Georgia marble. The following year, the park board installed the marble sculpture at the southeastern entrance of Humboldt Park. Unfortunately, Chicago’s freeze-thaw cycle and graffiti removal have taken their toll on Home and the integrity of the marble artwork has been greatly compromised. Mulligan also sculpted Lincoln the Rail-splitter in Garfield Park and the William McKinley Monument in McKinley Park which have both fared somewhat better because they were cast in bronze.

Gallery:
Humboldt Park: Home
Date Posted: 7/24/2015 "When first installed, many of the original carved marble details of the sculpture were…
Advertisement