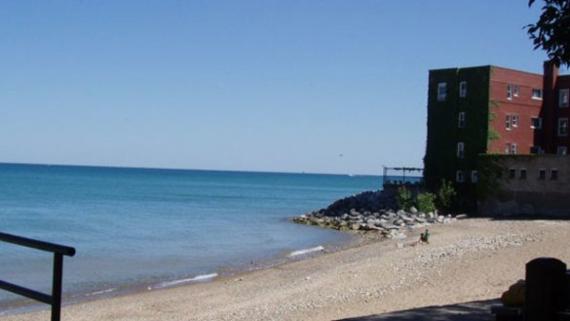 CLOSED
Closed for the season due to erosion.

Howard Beach is closed for the season due to erosion.  Please enjoy nearby Marion Mahony Griffin Beach.

A growing population of apartment dwellers in Rogers Park and other far North Side neighborhoods lacked easy access to recreational opportunities, making the beaches a valued neighborhood asset. In contrast to the city's larger municipal beaches, the street-end beaches had no changing rooms or other facilities — though lifeguards did man the beaches.

The city Bureau of Parks and Recreation often used adjacent street names for identification purposes. Howard Avenue and the adjoining beach are named for Howard Ure (1896-1984), scion of a Rogers Park pioneer family. John Calder Ure began to farm in the Rogers Park area in the mid-19th century. His son, John F. Ure, founded the Ure Dairy on his father's property and later donated the right-of-way for Howard Avenue. Howard Ure, a banker, became a director of the Howard Avenue Trust and Savings Bank at the early age of 26. Between 1953 and 1973, he served as a director of the North Shore National Bank of Chicago.

The Chicago Park District acquired Howard Beach Park from the City of Chicago in 1959. Since at least 1921, the city's Bureau of Parks and Recreation had operated the beach along with a group of 18 municipal beaches.