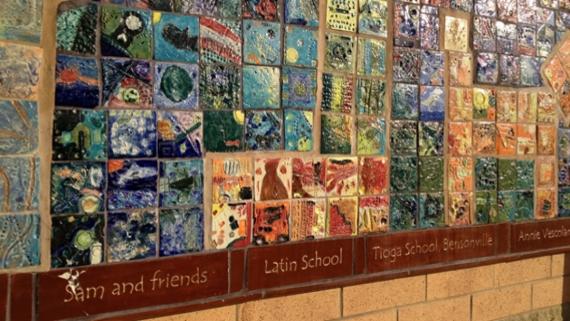 In 2005, the Chicago Park District completed construction of the Fosco Park Community Center, which has an indoor pool, a gymnasium, clubrooms and a daycare center to serve the surrounding neighborhood. To celebrate the opening of the center, the Erikson Institute, Chicago Public Art Group and Chicago Park District teamed up to sponsor a permanent outdoor ceramic mural.

The artwork enhances an exterior wall adjacent to the park’s playground. The project was inspired by the Erikson Institute’s commitment to childhood development and features the work of five hundred local school children between the ages of five and eight. Each child was invited to decorate his or her own ceramic tile, which was then incorporated into the final mural.

Entitled "Imagining the Possibilities," the mural showcases the children’s creativity. The students worked with lead artist Corinne D. Peterson to imagine their own possibilities and put their ideas into the tiles. For some, this took the form of carving or painting a story, including funny faces, planets from outer space, or jumping dolphins. For others, it was a chance to experiment with colors, textures and patterns.

Peterson artfully arranged the tiles into a larger scene of children at play, which is split down the middle by the exterior brickwork of the building. The unique shape of the overall composition frames some of the larger elements that immerge from the mural. On the right, a child dashes into the scene, his left foot raised mid-stride. Near the center, three dogs stand expectantly, perhaps waiting for the playful toss of a ball. Overhead, a bright sun rises out of the composition, and to the left, two V-shaped forms represent birds in flight, one of which has actually broken free from the mural. Along the bottom edge, Peterson included a frieze listing the schools, organizations, and several of the individuals who worked on the project.

Capturing the exuberant spirit of youth, "Imagining the Possibilities" serves as a reminder to foster our own imaginations and creativity.