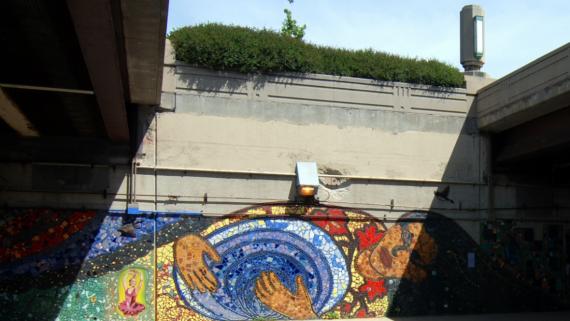 In October 2008, the Chicago Park District, the Chicago Public Art Group, and 48th Ward Alderman Mary Ann Smith invited artists Tracy Van Duinen, Todd Osborne, and Cynthia Weiss to produce a mosaic for the Foster Street underpass at Lake Shore Drive. The invitation came in the wake of positive response to the Bryn Mawr Street underpass mosaics created the previous year. For the Foster site, the artists wanted to incorporate the neighborhood’s Native American heritage. Edgewater was once home to the Potawatomi tribe, and today there are Native Americans living in the community. To honor this legacy, the artists worked with the American Indian Center of Chicago to conceive a dynamic, modern composition. Among the collaborators was Chicago artist Gerry Lang, who has worked on a number of other public artworks throughout the city, including the mosaic in the vestibule of the Eugene Field Park field house.

Indian Land Dancing was produced during the summer of 2009. Thirty-three teenagers from the youth organization Alternatives, Inc., worked together to cut, apply, and grout the mirror and ceramic tiles. The colorful, shimmering compositions combine historical and contemporary events. Details such as large, furry cattails speak to the area’s original marshland habitat. Cycles of nature are represented by a rising sun and blooming corn, and a soaring thunderbird is a symbolic harbinger of storm clouds and rain.

At the center of one mosaic, a matriarchal figure holds a sphere of circles symbolizing the lineage of multiple generations. Her dark, cascading hair contains “We Are the Mothers,” by Native American poet Frances Hagemann: “With our strong arms, we form a circle, and in that circle, we embrace the world.” The poem reflects the interconnected nature of Native American heritage, in which each generation is responsible for the next. Historical photographs transferred and incorporated into the mosaic to represent elder generations. The spirit of youth is depicted in the form of a skateboarder gliding down the woman’s hair. A signpost provides both a literal and symbolic representation of an intersection. Inscribed with the names of several local tribes, the post represents the convergence of many different people, a fitting image for a project in which many artists, students, and community volunteers collaborated.

Gallery:
Lincoln Park: Indian Land Dancing
Date Posted: 7/27/2015 A poem by Chicagoan Donald R20EdR21 Two-Rivers inspired the title of the mosaic and some of its…
Advertisement