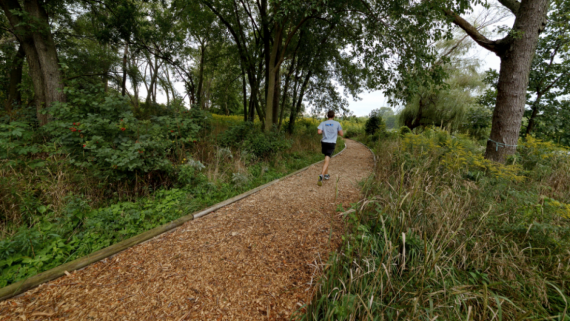 From the south: From E. Hayes Dr., go north on the road located just west of South Shore Dr.  A parking lot is located on the east side of that road.  This is a metered parking lot.  Walk north along the road to get to Bobolink meadow.

Bobolink Meadow is part of a network of 170 acres of natural areas within Jackson Park. The land containing Bobolink Meadow was created prior to the 1893 Columbian Exposition in Chicago when lakeshore marshes were filled in order to create Jackson Park. In the decades following the Exposition the land was used for athletic fields, ncluding baseball diamonds and tennis courts, and in the 1950s and 1960s, was then used by U.S. Army for the storage of Nike missiles.

In 1982, the meadow was designated as a natural area and named after the bobolink, a bird native to Illinois that birders hoped the natural area would one day attract. In 1989, additional restoration efforts attempted to establish native ecosystems on the thin layer of topsoil placed over the limestone and foundations from the Nike missile base. A mulch trail was installed through the meadow in 2005, and a new overlook on the northern end that provides views across the East Lagoon to the Japanese Garden and wooded island was installed in 2015.