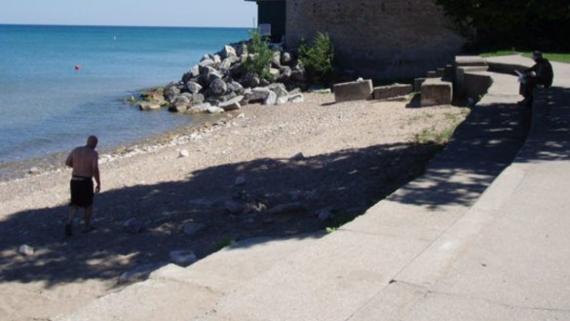 CLOSED
Closed for the season due to erosion.

Juneway Beach is closed for the season due to erosion.   Please enjoy nearby Marion Mahony Griffin Beach.

Juneway Street was named by Sivert Tobias Gunderson, a Norwegian who came to Chicago in 1848 and made his money trading grain and lumber. Gunderson and his offspring also became real-estate developers who subdivided the immediate area of the street and park. Apparently Gunderson chose the name Juneway because he started subdividing his property along the wayside of Calvary Cemetery in June.

The city's Bureau of Parks and Recreation had operated other small municipal beaches along Chicago's North Side since at least 1921. In 1959, The Chicago Park District acquired Juneway Beach Park from the City of Chicago as part of a “package” of 18 street-end beaches.

The city Bureau of Parks and Recreation used adjacent street names for identification purposes. As there is no earlier record of a public beach at Juneway Terrace, the site may have been a private beach prior to the Park District's acquisition.