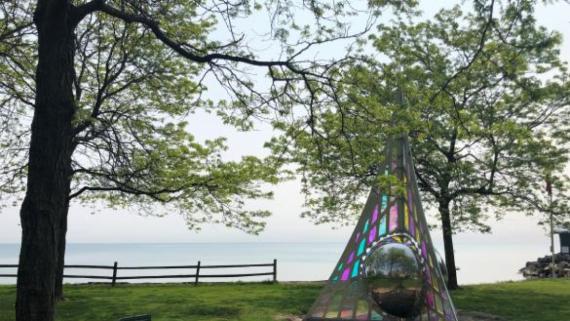 Swim only when lifeguards are on duty.
Follow lifeguards’ instructions.
Only Coast Guard approved personal flotation devices (PFDs) are permitted. Person-children wearing PFDs should have adult present.
No smoking.
No alcohol.
No dogs on the beach.
Do not feed birds or wildlife.
Dispose of trash and recycling in appropriate containers.
Grill in designated areas only and dispose of coals in red barrels.
Keep accessible beach walks clear. No bicycling, skateboarding or rollerblading is permitted in these areas.
There is no paddle or board sport access to the Lake Michigan Water Trail at Juneway Beach.

North Shore Park District acquired land that would be utilized for the park in 1915.  Juneway Beach Park is one of 18 street-end beaches acquired by the City of Chicago in 1959, which transferred the property to the Chicago Park District pursuant to the Chicago Park and City Exchange of Functions Act of 1957. As there is no earlier record of a public beach at Juneway Terrace, the site may have been a private beach prior to the park district's acquisition. The City's Bureau of Parks and Recreation had operated other small municipal beaches along Chicago's North Shore since at least 1921. It was the practice of the City Bureau of Parks and Recreation to use adjacent street names for identification purposes.

Juneway Street was named by Sivert Tobias Gunderson, a Norwegian who came to Chicago in 1848 and made his money trading grain and lumber. Gunderson and his offspring also became real estate developers who subdivided the immediate area of the street and park. Apparently, Gunderson chose the name Juneway because he started subdividing his property along the wayside of Calvary Cemetery in June.